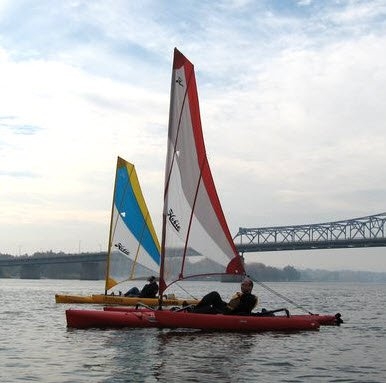 Join us down the Columbia

“A Journey Down the Columbia by Sail Kayak”

This June Captain Chris Staudinger, an adventure documentary film-maker, and his father Michael will embark on a journey that follows the length of the Columbia River. They will be spending ten days in two Hobie Adventure Sail Kayaks on the river. As they sail down they will be filming and documenting the journey. The expedition is designed to consider the Columbia’s essential role in the history of Washington State and its role now. It will reflect on the 12 hydroelectric dams the team will portage, the long stretch of the Hanford Nuclear plant they will traverse, and the various Native American tribal grounds they will pass through.

The duo will be traveling with their long time family friend Ken Berger. Ken is an avid photographer (handy to have on the trip) and a Licensed Massage Practitioner (also handy to have on the trip). He and Michael have known each other since kindergarten, and the course of their friendship has led them through the landscapes of births and deaths, marriages and divorces, schools, career changes and outdoor adventures. These stories collide as the history of the river interweaves with the history of father, son and friend. It is a journey of self discovery set on the stage of outdoor exploration.

This is the first time the U.S. length of the Columbia will have been attempted by sail kayak and the first Father/Son duo to attempt it together.

Captain Chris Staudinger is an award-winning travel documentary maker and Spokane native who has spent the last two years based in Korea. Michael Staudinger is a published author who grew up in Washington and whose most recent work, A Conspiracy of Little Things, underscores the savage beauty of Washington State’s barren scrubland. The two will be using the expedition as a research trip to share the beauty of Washington State with the world in their respective fields as well as a chance to get to know one another again as they have spent two years apart while the younger Staudinger has been living abroad.

For more information on the Columbia Expedition (launching May 27th, 2011) or on the film production company, Captain & Clark, please feel free to visit http://CaptainAndClark.com/.