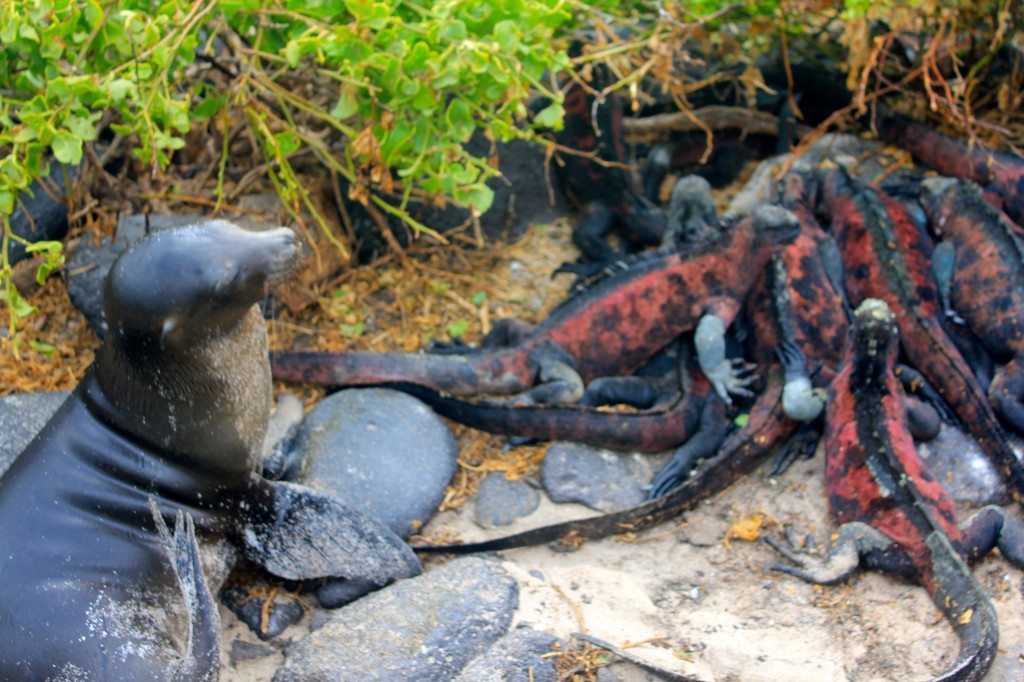 The Wonders of the Galapagos

It’s no secret that the Galapagos islands house some of the most awe inspiring creatures in the world.  If you don’t know what the word “endemic” means before you head to the islands, it will definitely be etched into your vocabulary when you leave.  Endemic animals and plants are those that can only be found in certain areas or regions.  Some creatures that we had the fortune of seeing in the Galapagos are endemic to certain islands.  They can only be found on this one island in the entire world.

If that isn’t mind blowing enough, their lack of concern for human visitors will astound you.   Most sea lions couldn’t even bare to raise an eyebrow as we walked by and casually snapped their pictures.  It seemed that the land iguanas were merely impartial to our footsteps as we carefully stepped over their sunbathing bodies on the marked paths, and the white tipped sharks didn’t even look our way as we snorkeled over their dangerously close forms.  In fact, the only animals that seemed even slightly intrigued were the youngsters. 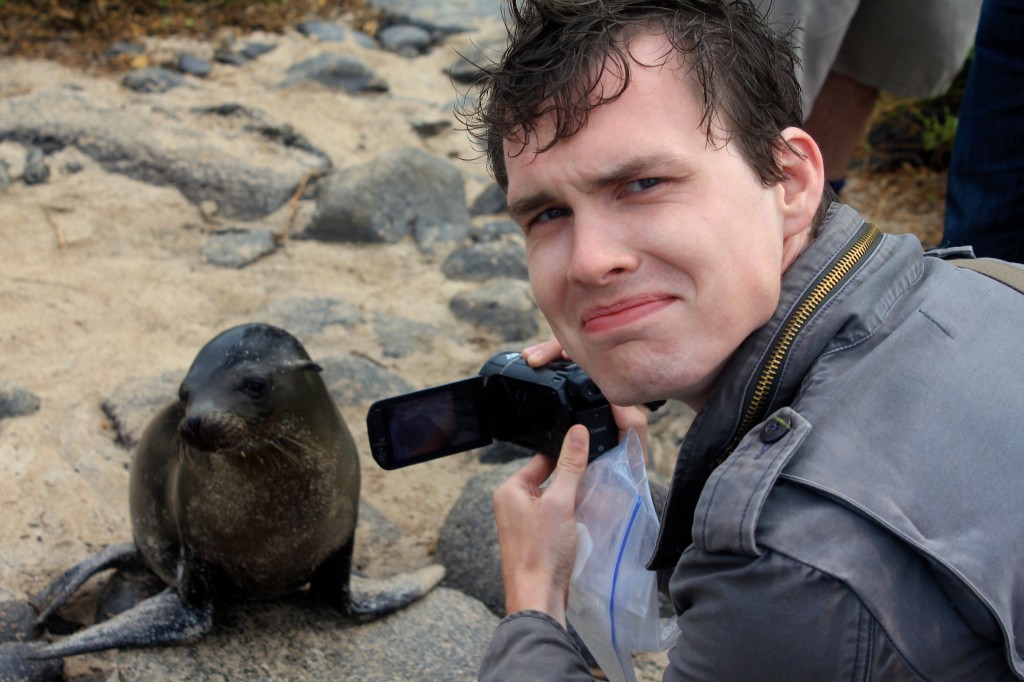 We were fortunate enough to see a wide array of Galapagos natives while on our trip- blue footed boobies, land iguanas, marine iguanas (Darwin lovingly referred to them as “imps of darkness”), hybrid iguanas (a mix of the two aforementioned reptiles), mating albatrosses, giant tortoises, sea lions, sea turtles, white tipped sharks, parrotfish, frigate birds, and so many other beautiful animals.  On land, in the sea, and up in the air there were endless amounts of creatures that you’d be hard pressed to find living together anywhere else. 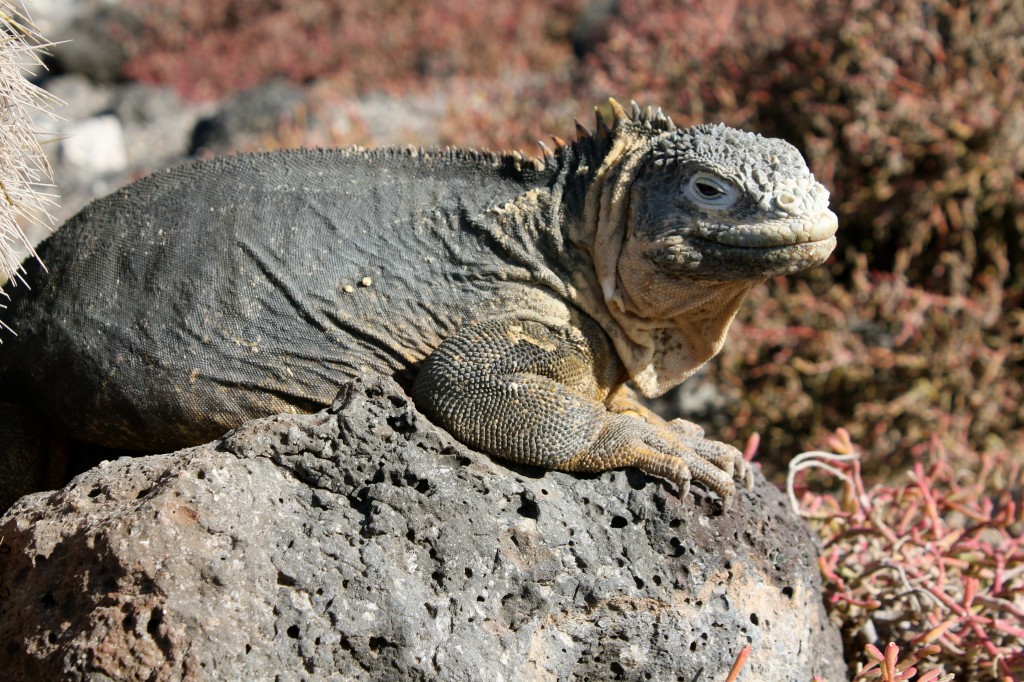 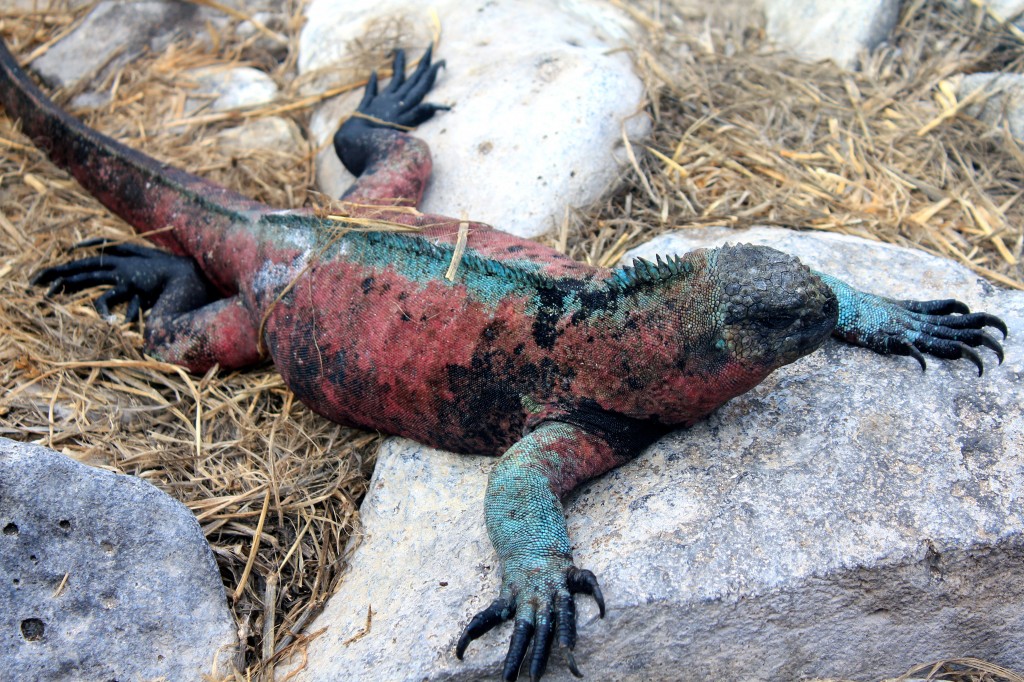 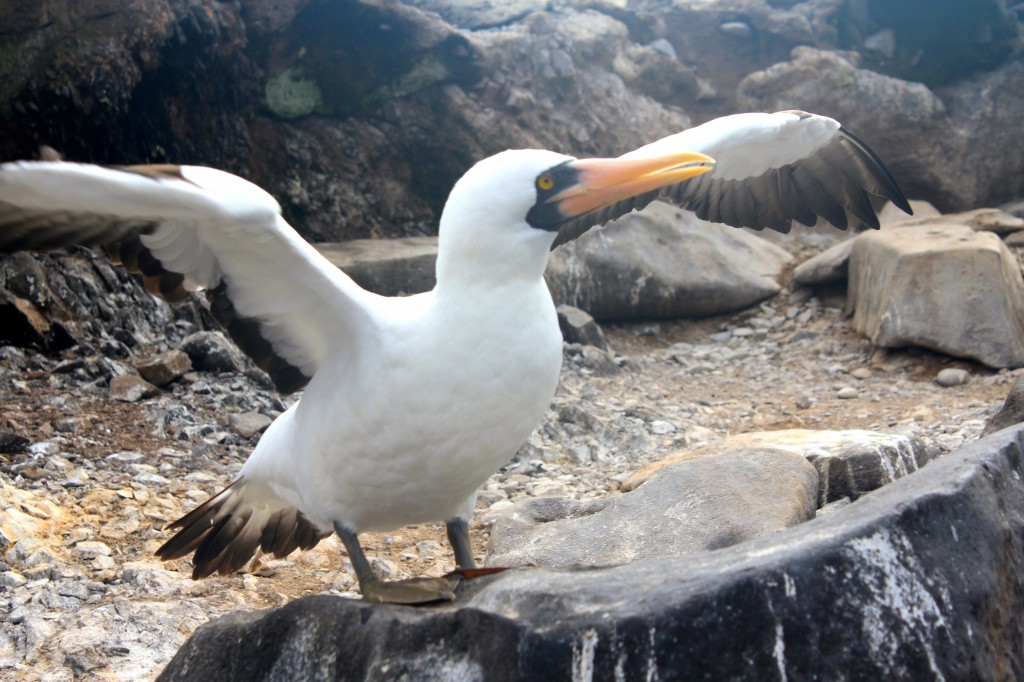 My favorite animals by far were the ubiquitous sea lions.  They seemed utterly unfazed by our presence and would often nap on park benches and side walks while we were on San Cristobal island.  We also had a few close encounters with them as they would curiously approach us while snorkeling.  Their Spanish name is lobos de marino or “sea wolf” which I think if more fitting.  They definitely look more like wolves than any lions I’ve ever seen.

The sea lions live in large colonies with one dominant male.  These males can grow to be up to 7 feet long and 800 pounds!  The dominant bulls are in charge of their harem which can hold upwards of 25 cows.  They have quite the job as they have to defend their territory, make sure the little ones stay out of danger, and hunt for their food.

Sea lions pups are ridiculously adorable with their tiny ears, big eyes, and clumsy stature.  When they’re not napping or nursing, they’re more than happy to stumble around the harem waking up the other cows from their naps with their loud cries.  These cute sea wolves are one of the main attractions of the Galapagos and can be found on most of the islands. 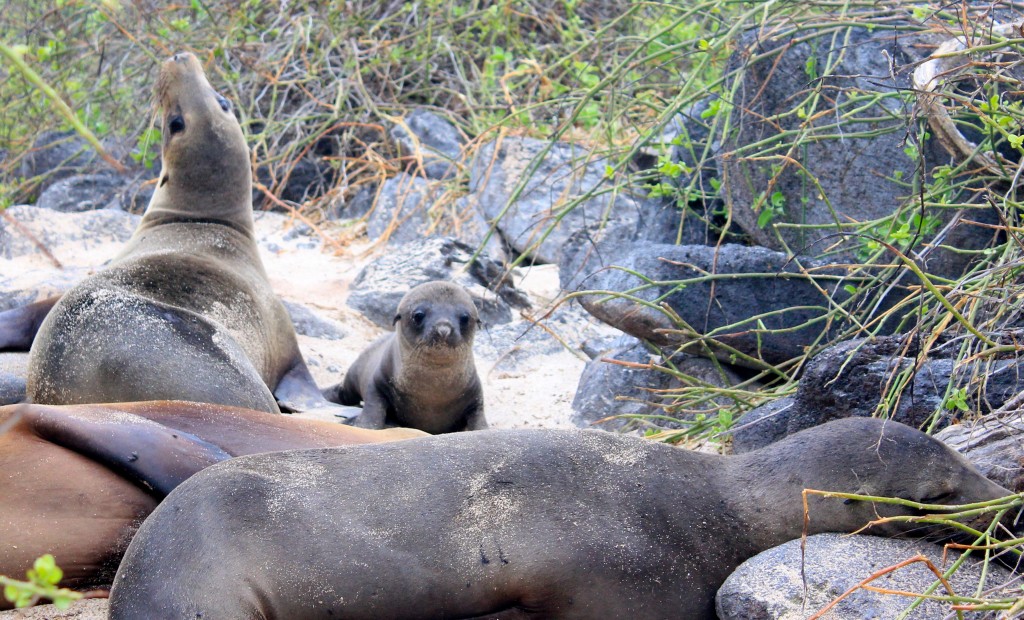 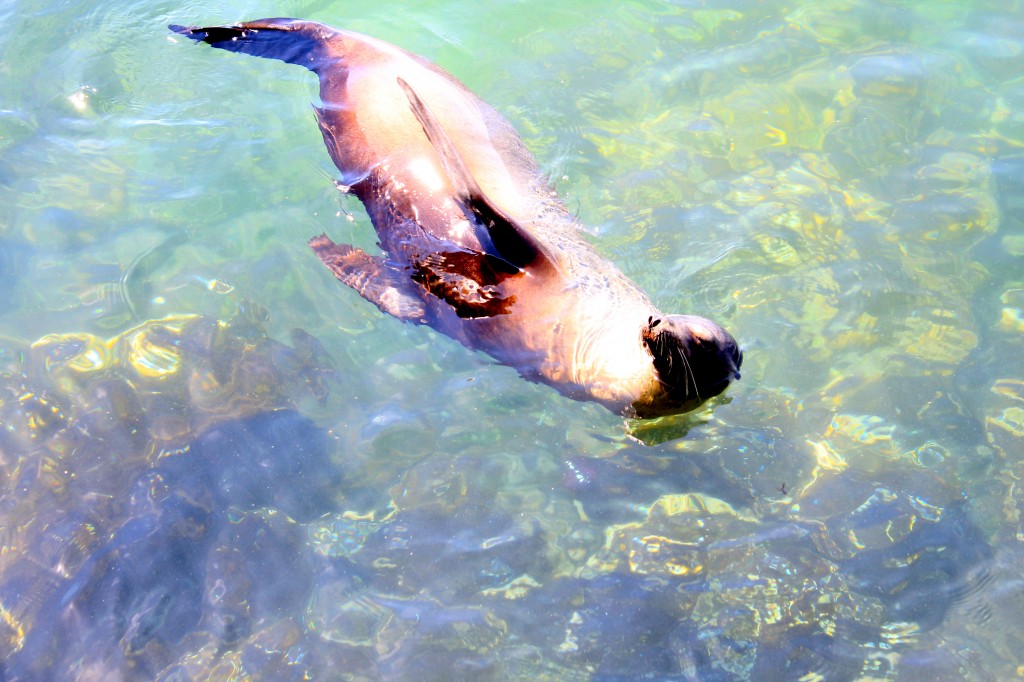 The unofficial mascot of the Galapagos islands might just be the curiously named blue footed boobies.  These birds have an almost permanently confused look on their faces.  Their name “booby” actually comes from the Spanish word bobo that translates as ‘fool’ or ‘clown’.  Against popular belief, you cannot tell the males and females apart by the blue shades of their feet.  Our guide, Fabrizio, explained that female boobies have larger and darker irises and that it’s easier to tell a booby’s sex by its eyes.

Boobies will often lay 2-3 eggs.  In the occurrence that a booby has multiple chicks and little food to give- it will often choose to feed the smaller one, the one that demands less food, in order than at least one chick survives.  The boobies make their nests in the ground and both the male and female will take turns incubating the eggs. 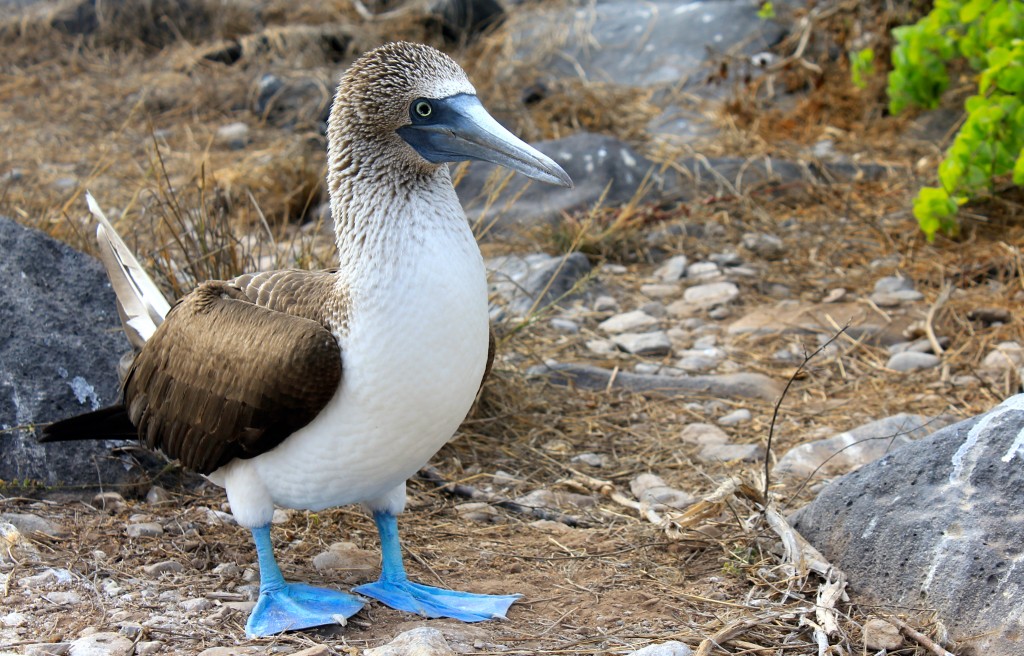 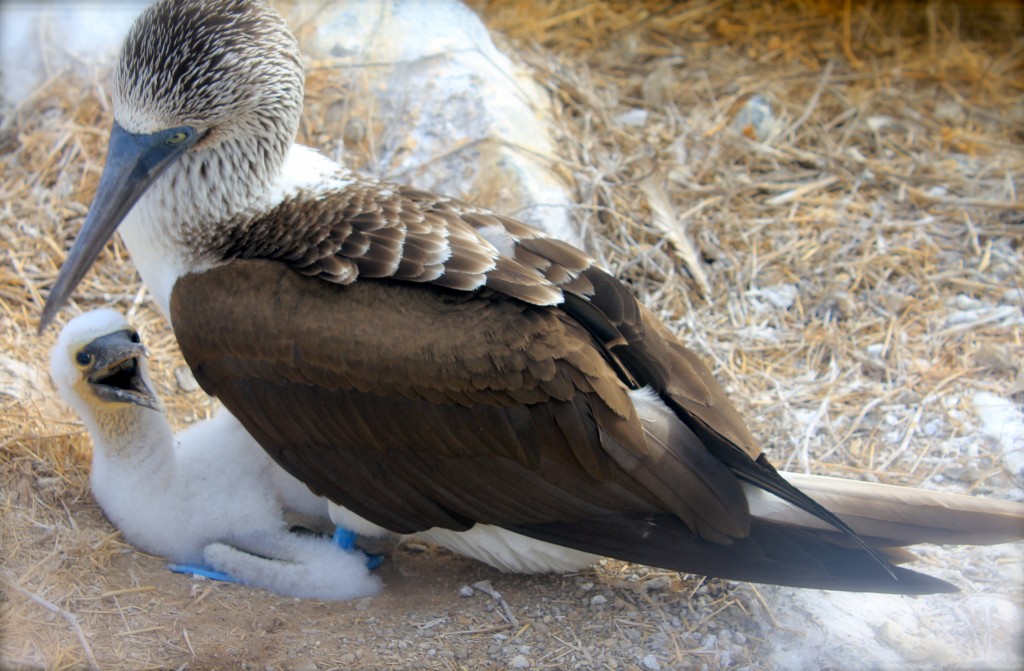 The Galapagos islands are a thing of mystery and wonder.  If you ever have the opportunity to visit, take it with open arms.  You will see so many endemic animals in their natural habitat.  Unfortunately, the Galapagos penguins and flamingos evaded us during our visit to the islands.  It just gives us another reason to eventually return.

2 thoughts on “The Wonders of the Galapagos”