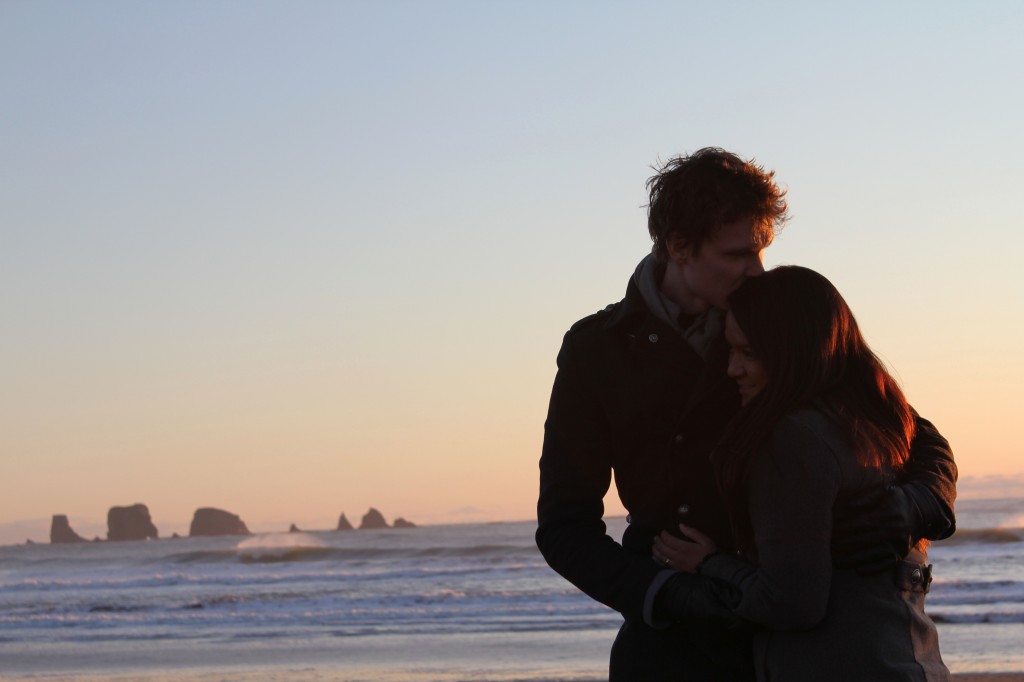 Hooray!  Our friend Cailin from TravelYourself.com and Cailin Travels has nominated us to complete the A-Z travel questionnaire.  We’ve been enjoying ourselves while reading these all over the web and are so thrilled that we get the chance to complete our own.

A: Age in which you first internationally traveled.

For Tawny, it was 16.  She played for a select soccer league and the team had a tournament in Vancouver, Canada.  It was her first experience out of the United States.  It wasn’t until she was 19 that she left North America and headed to Martinique to live with a host family and study her French.

Chris started his international exploration early.  His parents took him to Canada when he was just one year old.  His mother then took him to New Zealand when we was twelve and his father took him out to Guatemala at sixteen.  We’re not even going to start talking about his epic cruise around the world.

B: Best (foreign) beer and where.

Tusker beer!  The beer is made in Kenya but we enjoyed it while we were traveling through Tanzania.  It’s the beer that we drank while on safari in the Serengeti and to celebrate our summit of Mount Kilimanjaro.  We’ve been trying to track it down since returning to the States, but there are only 2 retailers that we’ve found in Washington state.

For Tawny, it’s probably Mexican.  Although Thai food comes very close in second place.  Give her a chimichanga or chicken pad thai and she’ll be a happy girl.  We love our spice.  Since living in Korea, 5 star Thai doesn’t even phase us.

Chris has a preference for Thai as well.  In fact, every time we visit Thailand he eats Tom Kha Gai for every meal.  Every.single.meal.

D: Destinations (favorite) and why? Least favorite and why?

Our favorite destination thus far is probably Thailand.  It’s a place that we can see ourselves revisiting time and time again.  We love the food, the climate, and the people.  There’s always so much to do and see while offering a variety of way to sit back and relax.

Our least favorite?  We don’t think we’ve ever been to a place that we didn’t really enjoy.  We tend to shy away from the real touristy places, but other than that, we seems to find adventure wherever we are.

E: Event you experienced that made you say “wow”

Hands down, the mourning ceremony of Ashura in Bahrain.  It was something that was completely unplanned and turned out to be a great learning experience.  We didn’t know very much about Islam before our trip to Bahrain, and we embraced the opportunity to learn more about Shi’a culture and traditions.  You can see more in the video below but be warned, it may not be appropriate for all audiences.

Anything on the water.  We’d have to go with Sailing.  Chris is a natural on the water and Tawny’s been getting more comfortable.  Both of us have sailing licenses that we’re hoping to use on a sailing expedition around the world.  Who’s with us?

The feeling of wonderment that you get when visiting a place or monument that you’ve only seen in magazines.  To realize that you’re actually there, taking it in.  Those are the moments that we are truly taken aback and are so grateful for the experiences that we’ve had. 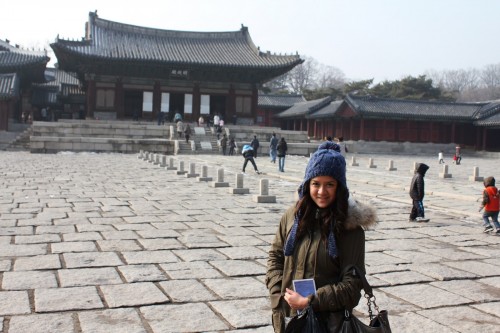 Honestly, probably the southern States of America in the summer time.  It’s not just hot, it’s humid!  For a completely different heat, try Nevada.  That’s just hot and dry.  We’ve been to Thailand, Hawaii, the Amazon, and the Middle East.  All hot, but not nearly as unbearable as some of the states in the U.S.

I: Incredible service you’ve experienced and where?

La Casa de la Playa resort on Siguijor island in the Philippines.  We were treated to awesome beachfront property complete with hammocks and fresh banana milkshakes.  La Casa de la Playa also threw an amazing Christmas party complete with an entire roasted pig.  The resort owner took us on a private tour around the island where we were able to meet a local healer.  Chris got his shoulder massaged and healed, and we also picked up a few charms that are meant to protect us on our travels.

J: Journey that took you the longest?

Does our road trip across the U.S. count?  We spent three weeks on the road with Rand McNally and USA Today trying to find the most patriotic small towns in the United States.  We started in New York and passed through over 25 states, ending the rally in Los Angeles, California.  It was awesome!

K: Keepsakes from your travels?

Art.  We collect all kinds of local art for our future house.  We have statues, paintings, and ceramics from all of our travels.  We’re storing most of them at our parent’s houses, but we can’t wait to have them up in a place of our own.

L: Let down sight?  Where and why?

Probably the DMZ separating North and South Korea on the 38th parallel.  Coming from America, we had this hyped up vision of what it would be like.  We pictured armed guards, a somber tone, lots of barbed wire.  Instead, we saw candy vendors, balloons, and families on vacation.

We’re pretty sure it’s because we went to the lesser known part of the DMZ, not the one in Seoul.  We took a week long road trip along the east coast, ending at a section of the DMZ that’s right along the water.  It was a beautiful site, just not what we were expecting.  Would we go back?  Hell yeah.

M: Moment where you fell in love with travel?

I think it’s safe to say that we’ve both been in love with travel for as long as we can remember.  We are inquisitive by nature, and can satiate that curiosity while on the road.  There have been many times along our travels where our breaths are completely taken away and we find ourselves in awe at what we’ve experienced.  That’s when we fall in love with travel all over again.

The Panviman Spa Resort in Chiang Mai, Thailand.  We decided to “splurge” on our second trip to Thailand.  When we booked our tickets, the hotel was $40/night.  We were utterly shocked when we recommended the hotel to a friend and she said that the prices had soared to over $250/night.  I don’t know how we got such an amazing price, but we’re not complaining.  It’s a 40 minute drive from the center of Chiang Mai set deep in a misty hillside.  The resort is breathtakingly beautiful and somewhere we’d definitely visit again- as long as the price is right.

O: Obsession.  What are you obsessed with taking pictures of?

Food!  Haha we are obsessed with taking pictures of our culinary delights.  We have albums dedicated to pad thai, chicken and menestra, hodduk, samgyupsal, and even balut.

P: Passport stamps.  How many and from where?

Are you ready for this?  The quirkiest attraction that we’ve even been to has to be the world’s largest penis park located in South Korea.  You read that right.  It’s a park filled with erections of all shapes and sizes.  Don’t believe me?  Check out the video below.

You mean aside from the penis park?  An experience that we’d definitely recommend is getting a traditional sak yant tattoo from a monk in Thailand.  These tattoos are seen as blessings, and magical.  They can bring wealth, prosperity, and protection.  They’re tattooed on the skin using a sharpened bamboo rod and ink sometimes cultivated from a concoction of snake venom and bamboo ash. 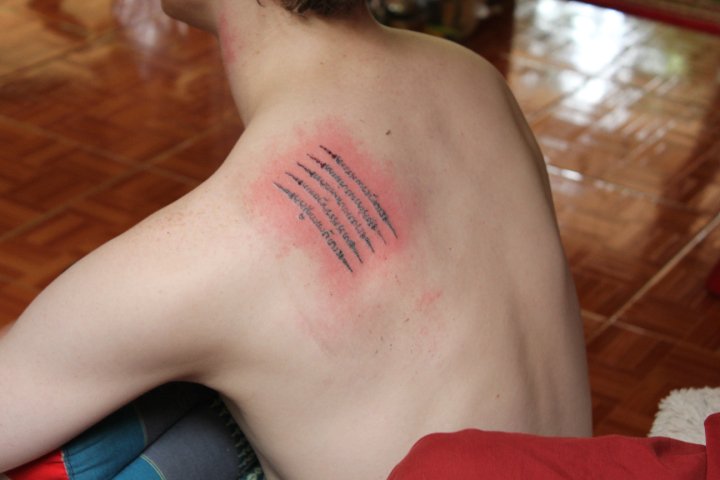 Another unforgettable experience would be watching falcon training in Bahrain.  We are so lucky to have friends in Bahrain.  Friends with dads who are veterinarians for the royal family are a big plus.  Not only did we get a personal behind the scenes tour of the royal zoo, but we were also taken out on secluded property to watch royal falcons learn how to hunt.  It was incredible!

S: Splurge! Something you don’t mind forking over for while traveling?

Being from the Seattle area, the one thing we always treat ourselves to is coffee… and good coffee at that.  A good coffee shop gives us a chance to relax and feel at home.  Coffee might actually be the one thing that keeps us sane while on our travels.  If we find ourselves needing a break or a timeout, we search for the nearest caffeine dealer.

We tend to stray from the extreme tourist attractions in any area.  Of course we’ll stop by the Eiffel Tower or walk along the Great Wall of China, but we really enjoy forging our own path.  The most touristy thing that we’ve done would probably have to be taking an organized cruise around the Galapagos islands.

One of our most unforgettable travel memories is our trip to the Galapagos islands.  It was a dream that was years in the making.  Not only are the Galapagos full of wonder and intrigue, but they were also the stepping stone to our RTW trip.  We scooped up 22 letters from an old post barrel on Floreana island.  We plan on hand delivering these letters to the strangers that they’re addressed to all around the world.  Definitely an experience that we’ll have with us forever.

V: Visas.  How many of them and for where?

Let’s see.  We have visas for Kenya, Tanzania, South Korea, and the U.A.E.  Chris has a few extra from his trip around the world.  India, Japan, China, and a few others.  We’ll have to pull out all of our passports just to be sure.

W: Wine. Best glass of wine had while travelling and where?

We’re more into rum, but the best wine we’ve had would probably be the sangria we recently sipped in Ecuador.  It was refreshing and the perfect way to come off our high from the Galapagos islands. 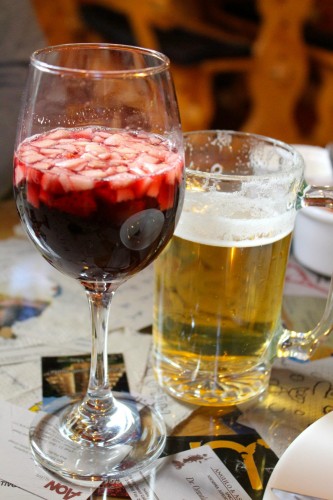 X: eXcellent views and from where?

Chris claims that the best views he’s ever seen have been aboard the Robert C. Seamans, a 134- foot steel sailing brigantine.  He had the opportunity to live and travel the world for a few months on the ship with fellow crew members of the Sea Education Association.  It’s one of his top ten life experiences and one that he’d like to relive sometime soon.

How do we keep count?  Let’s just say that we’ve been traveling in one form or another for our entire lives. 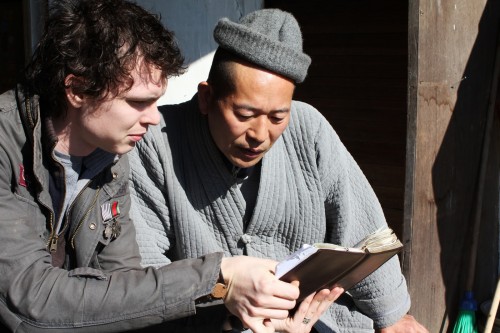 Z: Zealous sports fan and where?

That would probably have to be our hometown of Seattle, Washington.  Have you been to a Seahawks game?  Our fans are notorious for being the loudest in the stadium.  You can’t even hear yourself think!

Now it’s time to nominate a few other travel blogs.  Who to pick?

We nominate Backpack with Brock, twoOregonians, GQ Trippin, and The Travel Maverick.   We know there’s a strong change that many of you have already been nominated… but that’s even more reason to participate!

Leave a Reply to Raul (ilivetotravel in Twitter) Cancel reply