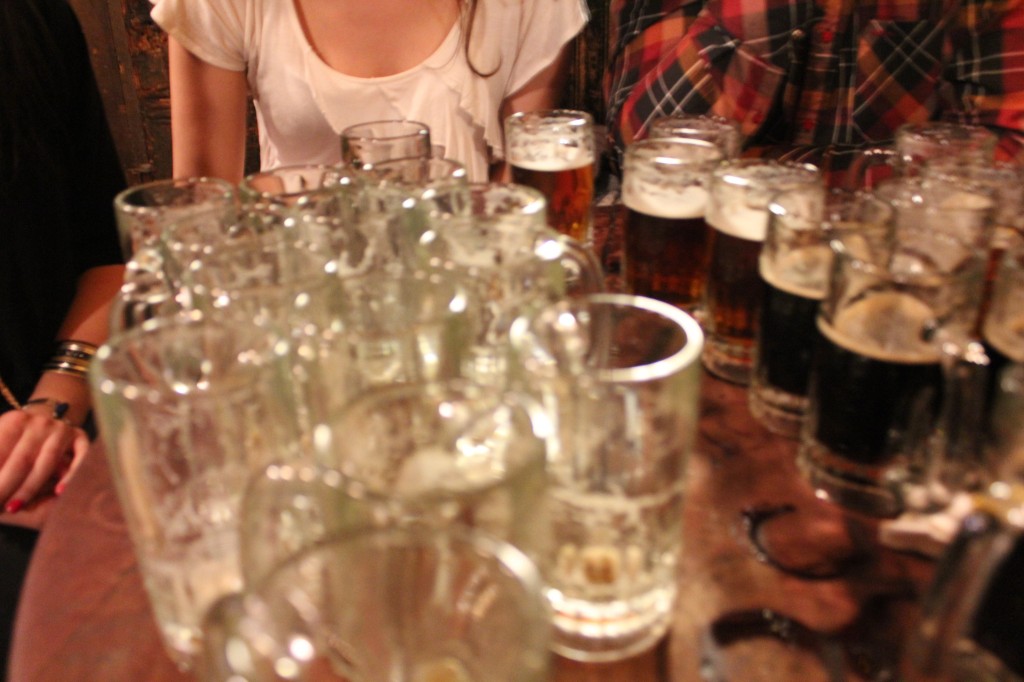 If there’s anything you really need to know about us, it’s that we love and appreciate a unique eating and drinking adventure.  Our recent trip to NYC would not have been complete without a trip to McSorely’s Old Ale House.  With the slogan, “We were here before you were born”, McSorely’s is a bar that is soaked in booze and tradition.

Dubbed the oldest Irish tavern in New York, McSorely’s was one of the last “Men Only” pubs, refusing to allow women until they were urged (read: forced) to do so in 1970. The resistance remained with women and men having to share one restroom.  It wasn’t until 1986 that a second bathroom specifically for women was built.  Hooray for equality- although I might have peeked into both restrooms and then men have it much better off.

McSorely’s Old Ale House remains true to its humble beginnings.  Sawdust still coats the floor and it has been said that no memorabilia has been taken down or replaced since 1910.  The walls are plastered with grainy, sepia-toned pictures of stone-faced families, old newspaper clippings, and a couple nude paintings.  Look to the bar and you’ll even see the handcuffs that once belonged to Harry Houdini.

If the old decor, slogan, and defiancy of McSorley’s doesn’t get you, their unique style of serving ale surely will.  So, just how do you order beer at McSorleys?  Well, are you the kind of person that prefers odd numbers?  If so, McSorely’s may not be right for you.  Their house ale, well- the only ale they serve, comes in light and dark.  That will keep the ordering simple.  Also, they will only serve you beer in pairs (think shoes).

We went to McSorely’s with four of our friends.  As it was our first time, we were warned beforehand that we had to order our ale in twos.  I thought that I’d get a little crazy and maybe order myself four glasses.  Instead, we sat down and my friend Brendan shouts out, “Forty beers, twenty light and twenty dark“.  Um, WHAT?!  I quickly did simple math in my head.  Forty divided by six equals… me getting drunk.  What made the situation even better was that we had a slight miscommunication and another person from our party has already ordered 12 beers.  That’s right, we had 52 beers taking up the entire space of our table. 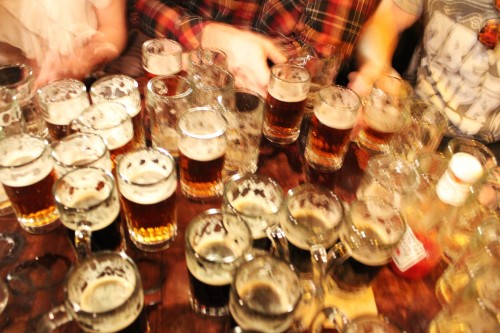 While there’s a strong chance that you’ll leave McSorley’s Old Ale House pretty inebriated, the tavern’s bar decor is actually quite sobering.  As soon as you walk in the door and are passing the bar, look to your right.  You’ll see old, dusty wishbones hanging in a row.  The wishbones once belonged to young men being sent to fight in World War I.  The wishbones represent their hope and “wish” to return home safely.  Once the men made it safely back home, they’d return to McSorley’s and pick up their wishbone.  The two dozen that remain are said to mark the young men that never made it back.

If you ever find yourself hankering for some booze and history, make sure to stop in at McSorley’s.  It’s not guaranteed that you’ll get your own table, but we’re certain that you’ll make friends quite easily.  Go for the beer, stay for the stories.

How to get to McSorley’s:

Like what you saw?  Check out the rest of the site for more travel adventure videos.

Captain & Clark
3
Tags :
how to order at McSorley'sMcSorley's Ale House