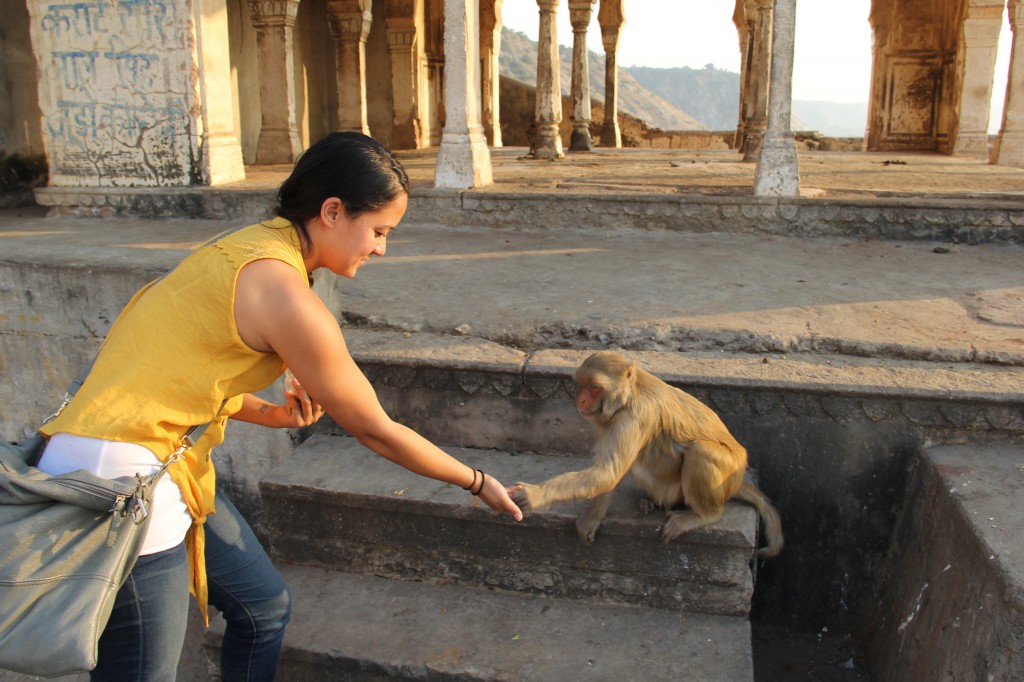 The worst kind of monkey business…

If you give a monkey a banana… a thousand monkeys will descend upon you and try to kill your friends. This is the lesson we learned very recently as we drove through India. A lesson hard bought.

We had been traveling around Rajasthan for the past five days with our new friends, Imran and Ali.  We had hit Jaipur, Bikaner, Jaisalmer, and Jodhpur.  Hours in the car were spent dancing to Indian hip hop and trying to spot as many animals as possible.  At that point we had already spotted numerous dogs, cats, boars, peacocks, horses, donkeys, elephants, camels, snakes, and red monkeys.  It was a first class menagerie. Similar to that scene in Aladdin when he rolls into town with the Genie.

It was on the winding and bumpy road to Udaipur, the “Venice of the east”, that we encountered our first black monkey.  What the real name is for these monkeys, we don’t know. All we were told is, “this is a very dangerous road.  At night, people come out from the jungle to steal and kidnap people, especially you people.  Also, there are many black monkeys”, Imran casually explained with a thumbs up. Sweet.  Truth be told, we weren’t too worried about the monkeys, we were more worried about having our organs harvested in the night.  How foolish we were.  We didn’t know where the real danger was.

That’s when we spotted him, a lone black monkey idly sitting on the side of the road.  He was cute, really cute.  There wasn’t anything scary about him.  Ali slowly pulled the car up beside him so that we could snap a few photos.

Mr. Monkey posed for a couple of pictures while Imran fished out the two bananas that we had left over from our roadside feast the day before.  He handed the monkey one banana, which he politely took, and then the other.  I was just about to remark how sweet he was when I saw movement out of the corner of my eye.  Before I knew it, dozens of monkeys were emerging from the trees around us.  These monkeys were not so sweet.

The hoard of monkeys began to chase down our car, attempting to jump into the windows.  Where there was once only one monkey, a hundred now stood.  There were screeches and yelps as each monkey fought to make it to our car.  Baby monkeys were tightly clinging to their mothers as they raced to catch up to the car.  Ali was attempting to maneuver through the tide of monkeys, hoping that we all, monkeys included, escaped unscathed.

These monkeys reminded us so much of the winged primates in the Wizard of Oz.  I’m not sure which ones were more terrifying.  The good part is that we got the entire thing on film, screams and all.

Learn from our mistake friends, in India there are two types of monkeys. One friendly, one savage.

Behold the gentle red monkey, which has evolved the talent of taking food from your hand without giving you rabies. These beauties lounge about roadside stands and populated temples.

These monkeys are not to be confused with the feral black monkeys.

The black monkeys have long tails and lope quickly around old temple ruins. These monkeys will jump on you and take things from your hands or even out of your pockets.

11 thoughts on “The worst kind of monkey business…”

Leave a Reply to D.J. - The World of Deej Cancel reply