Chris and I have done our fair share of camping desert safaris.  In fact, the last desert safari was done on the dunes of Dubai.  It was Christmas eve 2009 and we ended up spending the night literally stranded with two Greek dentists we had just met, a hookah, and bottle of rum.  I awoke ..." />
Travel News

A harrowing night camping under the stars in Jaisalmer, India.

Chris and I have done our fair share of camping desert safaris.  In fact, the last desert safari was done on the dunes of Dubai.  It was Christmas eve 2009 and we ended up spending the night literally stranded with two Greek dentists we had just met, a hookah, and bottle of rum.  I awoke on Christmas day to the most glorious sunrise as well as a huge, bulging right eyelid that had fallen victim to the bite of a horsefly. 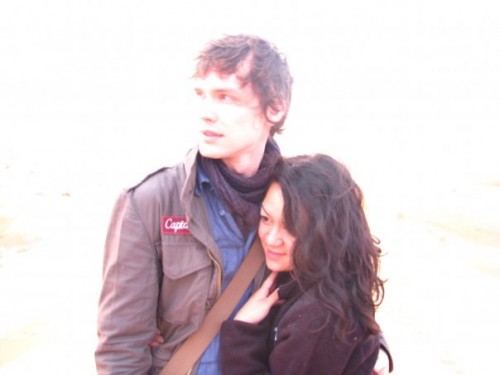 Conforming to tradition, our Jaisalmser camel safari was just as exciting.  After the usual, touristy meal with the native band playing the background, we were treated to a bout of traditional dancing and flare.  As the festivities wound down, the throngs of French tourists returned back to the tour bus leaving only Chris, our two guides, and myself in the quiet, open desert.

Already reminiscing about our previous desert experience, I had told myself that I would sleep in a tent this time around to prevent the bite of another rude horse fly.  I watched as our new friends and India liasons, Imran and Ali carried our supplies to our campsite for the night.  Imran brought a bottle of rum, as per tradition, and made sure that it was the first item and staple of the campsite.  Next came our sleeping bags, pillows, and bottles of water. 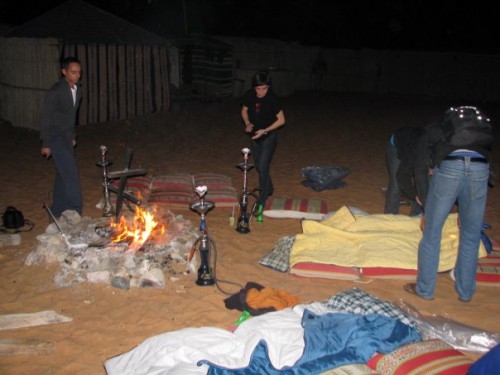 Our open-air campsite in Dubai. Horseflies and all.

I organized my sleeping bag and pillow and happily awaited the arrival of my tent.  Item after item was set down but there was no tent in sight.  As soon as Imran and Ali sat down I asked them when my fortress from the flies was coming.  They looked puzzled and Imran eventually explained, “Ah, yes.  You wanted a tent but there is no need for a tent.  See?  It’s very nice here”.  While it was indeed very nice, I knew that there were camels around, and where there are camels there are horseflies.  I tried to insist on a tent but was informed that we were too far out in the desert to get one.  I’d have to make do.

After a sufficient amount of rum drinking we all decided to call it a night.  I made sure all of my skin was covered, either with clothes or with the sleeping bag, and carefully draped my scarf over my face.  I would not become a horsefly’s meal tonight.  Right as I was settled in, Imran pointed out a faint light in the distance.  “Chris and Tawny, how far away do you think that light is?”, he asked.  I peered off.  I’ve never really been good at telling distance, but I took a guess, “I’d guess that it’s maybe 20 miles away.”  It was silent.  Imran let out a little chuckle and quickly said, “That is the Pakistan border.  Good night!”

Awesome.  I had just gotten the idea of being eaten alive by horseflies out of my head.  Now I was going to be lulled into sleep by the thought of armed terrorists taking me across the border never to be seen again… or worse.  Little did I know it would be something else entirely that would wake me from my sleep in a panic.

At my best Bear Gryll’s calculation, it was about 4 am when the howling started.  I knew what it was immediately.  After being in India for over two weeks I was well acquainted with the hoards of feral dogs that roamed the country.  At first it sounded like the wild pack of dogs was at least a mile away.  There were distant yips and growls.  I tucked myself further under the covers and tried to fall back asleep.  It seemed like only minutes later that the howling was right outside our camp.  I could clearly make out the shadows of at least a dozen stray desert dogs only a couple of yards away.

This was when I began to panic.  There we were, at least 40 miles from any type of civilization (aside from Pakistan) with the only suitable defensive weapon being my empty water bottle.  Things were not looking good and the dogs were only getting closer.  Chris, Imran, and Ali were now awake and to my ultimate horror Imran started calling out to the dogs.

My fight or flight instincts took in.  Do I try my luck at running ,knowing that I have no idea where we are and knee-deep in sand?  Or do I get up and punch Imran in the face, hoping that the dogs will see my abuse and get the message?  Naturally, I did neither.  Instead I stood completely still as the bravest dog of the bunch ran right over to my sleeping bag and…

lied down.  Yup, the ferocious leader took no time in making herself comfortable.  So comfortable in fact that at one point she tried to actually snuggle into my sleeping bag. 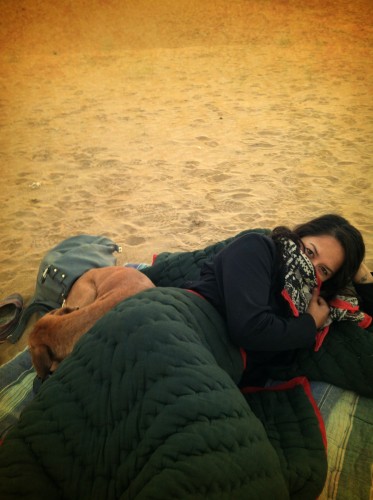 As the early morning light began to break, the other members of the pack slowly trickled away leaving me and my new buddy to take in the scenery.  The boys went to check out the stunning sunrise, but my new friend, Mit-hai (“desert” in Hindi) and I decided to stay behind and watch over our camp.

While my Thar desert experience wasn’t exactly what I expected, I did walk away with a new friend.  I’ll take a puppy buddy over a horsefly bite any day. 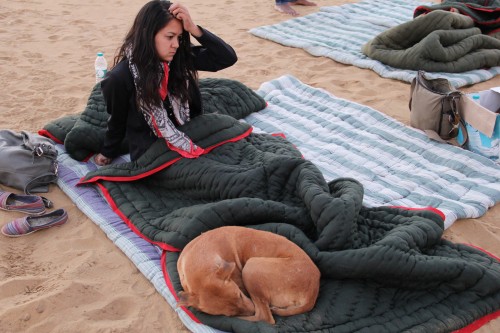 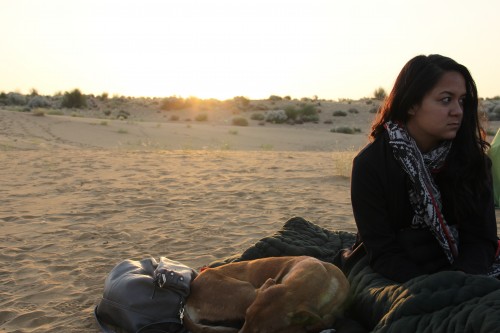