It’s no secret that things are getting crazy around here. With a little more than a month until our wedding we have found ourselves in a state of chaos. We’ve had to put the blog on the back burner as we try to embrace this time in our lives. We figure that we’re only going ..." />
Travel News

Taking on a new adventure

It’s no secret that things are getting crazy around here. With a little more than a month until our wedding we have found ourselves in a state of chaos. We’ve had to put the blog on the back burner as we try to embrace this time in our lives. We figure that we’re only going to be doing this once and we might as well try to enjoy it as much as possible.

So what have we been up to besides wedding prep? Good question. I had my bachelorette party in Orlando and Key West. It was slightly unconventional as my close girlfriends and I spent two whole days frolicking around Disney World and Universal Studios before we headed to The Keys. I think that’s why my friends and I are so close. We’re all big kids at heart and we even got all dolled up to visit Harry Potter World. Our themed getups even got us a few free passes to enjoy rides without waiting in line. Score. 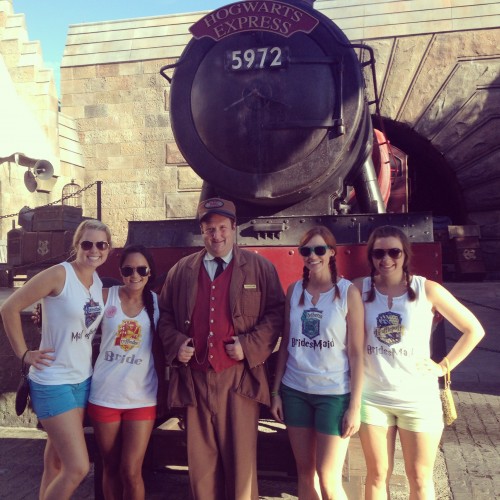 After 28 hours respectively spent at both theme parks, we decided that it was time to enjoy a little sun and surf. We were all too excited to be on vacation that we forget to check the weather reports. Who knew that Florida was expecting a hurricane? Not us. The bad news was that we experienced a little flooding and scattered showers while in Key West. The good news was that there weren’t a lot of crowds and we actually had a ton of fun. If there’s one piece of advice I can give to anyone visiting Key West for the first time it’s this: rent bicycles. My favorite day in Key West was spent riding around town with my friends and eating all the key lime pie I could shove in my face. 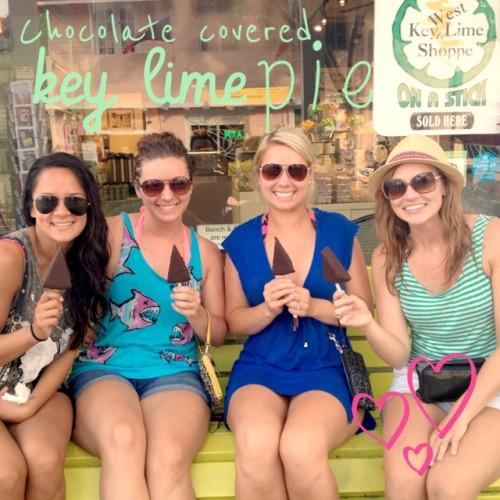 Now don’t go feeling all bad for Chris. He got to do a fair bit of traveling as well. He was in Captain heaven at the Tall Ship Festival in Michigan. I followed along on his trip via our instagram and twitter and was only a teeny bit shocked when I saw that he purchased himself some lederhosen. Needless to say, he had a blast eying all the ship candy, cruising in a glass bottom boat, and taking in all the delicious food that Michigan has to offer. You can check out videos of all the fun he had on our Tripfilms page. 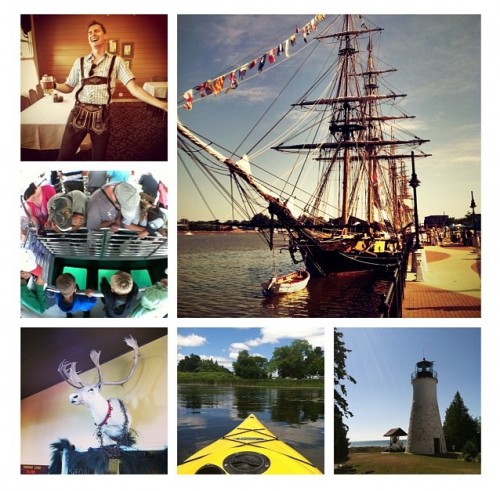 After all of the separate shenanigans we decided that we missed traveling together and hopped on a plane back to one of our new favorite places: Alberta, Canada. All of these visits up north have us falling in love with Canada more and more. I might even be a little addicted to Tim Hortons and I’m from Seattle! I felt like I was cheating at first, but it just tastes so damn good. Is it true that there’s nicotine in the coffee? Is that why it’s so addicting?

This time around we spend a few days exploring Edmonton. Did you know that Edmonton is home to the largest mall on the continent? It houses an indoor water park (with 17 water slides!), an indoor amusement park, an exact replica of Columbus’ Santa Maria, a climbing wall, over 800 stores, countless restaurants, and much to our delight, a themed hotel. We found ourselves in a Rome-themed room and it was awesome. There were two Roman statues, a round Hugh Hefner-like bed, and a jacuzzi tub that was the size of most New York apartments.

While we plan on writing about Edmonton on here soon, you can check out our adventure and a new video on the Expedia Viewfinder Blog. Spoiler alert: we rode segways. Double spoiler alert: We rode segways, filmed it, and edited it with gangster rap.

So, yes. We’ve been busy… but we miss you! We solemnly swear that as soon as we say “I do” we’ll be back in action. In fact, we have three weeks in Hawaii coming up and we need all the advice on romantic and adventurous things to do on Oahu, the Big Island, and Kauai. Lay ’em on us and let us know what you’ve been up to in the comment section below.