I love zombies for the same reason I love winter snow storms, camp fires, hiking, and in a lot of ways, travel. Somebody once had a brilliant quote about winter that pissed me off to no end. Unfortunatly, I was so angry about the quote that I neglected to take note of who said it. ..." />
Travel News

Why we love zombies

I love zombies for the same reason I love winter snow storms, camp fires, hiking, and in a lot of ways, travel. Somebody once had a brilliant quote about winter that pissed me off to no end. Unfortunatly, I was so angry about the quote that I neglected to take note of who said it. Today, it is one of my favorite sayings and here I am in the dark as to the idenity of the author. In short, they said,

“Many men say they love winter. This is in fact false. For no man loves winter for winter’s sake. What we speak of when we say we love winter is the feeling of being prepared against the barren chill and undiscerning teeth of winter.”

In this season of zombies, vampires, and werewolves there is no shortage of people proclaiming their undying love for these intrinsically evil things. At first it might be easy to dismiss this as mere adoration for Daryl from AMC’s the Walking Dead. While this thinking probably isn’t entirely wrong, I do think that zombies and winter have a lot in common.

For me it is that feeling of preparation and alpha dog success that I love about zombies. It’s the feeling you get after winning a game, acing a test, or delivering a kick-ass performance. This October, Tawny and I have gone all over the Pac Northwest indulging in a huge array of zombie themed activities and each one only serves to reaffirm the same mantra: “I like zombies because I want to feel like a bad-ass.” Why wouldn’t you? What isn’t appealing about feeling utterly prepared for the ultimate apocalypse? Knowing that when the crap hits the fan, you’ll be the pillar people lean on. There is something very life affirming in controlled chaos. When you survive a week-long backpacking trip through wilderness, or build a campfire and enjoy it’s warmth, when you make it through winter you have a concrete example of your success to lean on. Something you can point to and say, “I’m not helpless, I am a survivor.”

In this world of uncertainty and doubt, where we often second guess ourselves and wonder what tomorrow will bring, having tangible examples of our ability to succeed in hot water is worth more than a lifetime of gold.

For this reason, we love zombies.

Last night, Tawny and I went to Maris Farm’s Monster Safari. After driving out through the backwoods of Buckley we arrived at a massive dairy, hung heavy with mist. I had gone earlier in the day to see the pumpkin patch but this was an entirely new experience. You could hear the screams from the Haunted Woods trickling through the fog like skipping stones across a gravel parking lot. Tawny isn’t a huge fan of scary activities, so it wasn’t an easy sell to get her all the way out there. The 12 ft tall zombie clown on stilts that was running around near the ticket booth didn’t help either.

The safari itself was awesome. After you get your ticket you walk down a long dirt road to the loading station and wait. The zombie course is a 15 min ride in a converted school bus. You sit on a bench next to your buddy (perhaps the last face you’ll ever see) and pour a cup of paintballs into the hopper of a paintball gun mounted on the edge of the bus. The ride is brilliant. The paintballs are filled with UV reactive ink and the side of the bus is studded with blacklights. As you ride through the woods several young actors dressed as zombies crawl out of the buildings and attack the bus. Our job was simple… light them up. Tawny and I unloaded an entire hopper of paintballs on this seasonal zombie army. (Don’t worry, head shots are encouraged. The actors all wear protective masks and then reenforced zombie masks on top of those.) 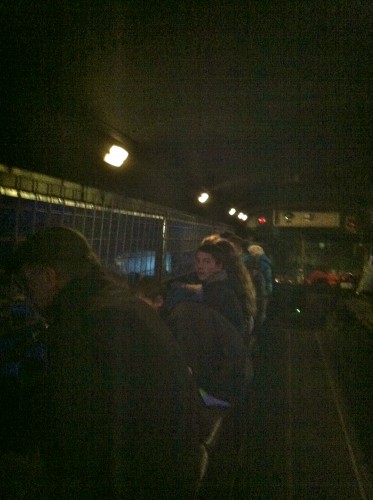 In the bus, getting ready to unleash zombie slaying mayhem 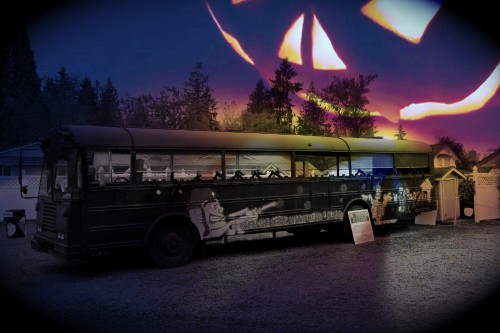 Sunday we’re set to go see the zombie shoot at Thomas Family Farm. We’ll let you know how they compare. I would encourage you to go out and see for yourself though. There’s only a few days left and it was well worth it. The scariest part for me was Tawny’s aim. I think she had a 99% ratio for headshots. She scares me.

This is what I’m talking about though, watching the love of your life unleash a deluge of paintballs into a sea of zombies is a very sexy thing. The only thing better than feeling prepared for the end of times is being confident that you married a woman who is even more capable. In fact we even took it to the next level and enlisted the pimpography* of Ben Herndon to immortalize our love with a zombie shoot. (The beauty of that phrase isn’t lost on me.) If you want your own zombie shoot you should hit him up, his rates are fair and his company is invigorating. 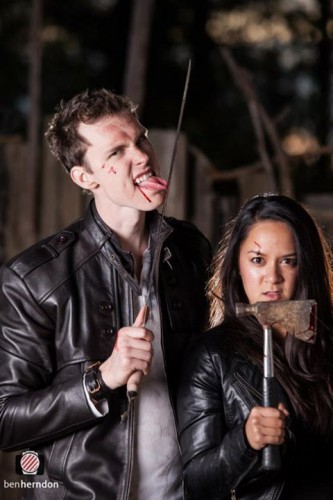 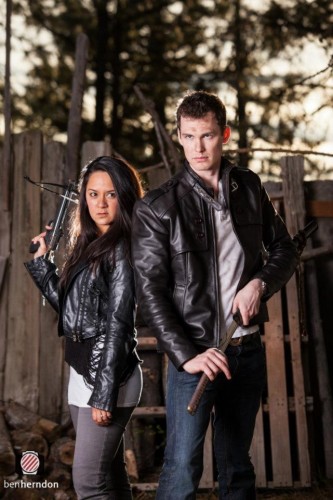 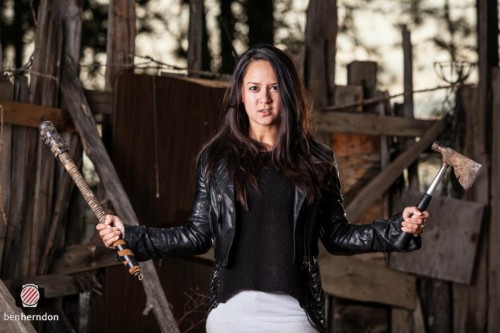 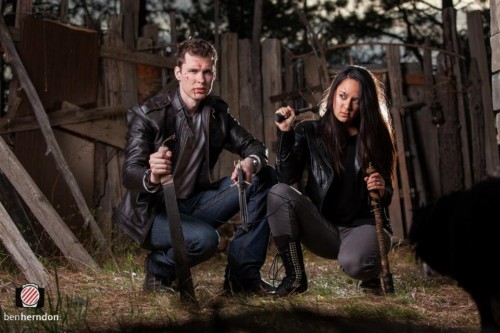 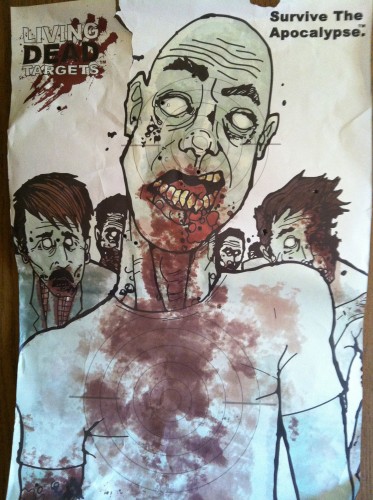 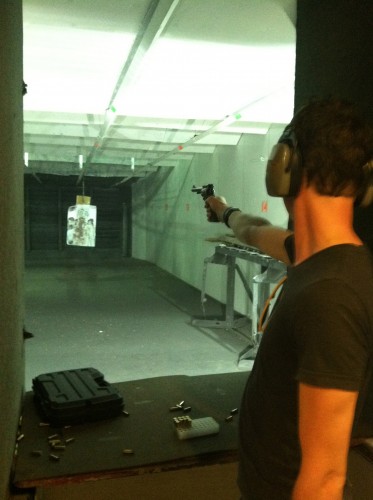 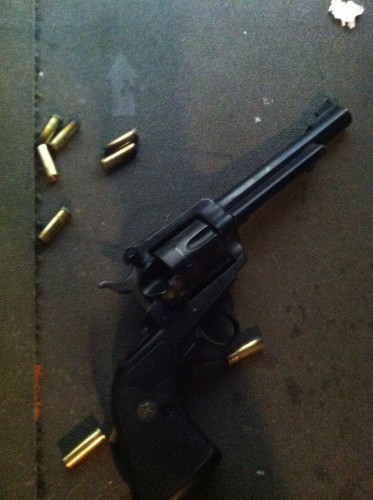 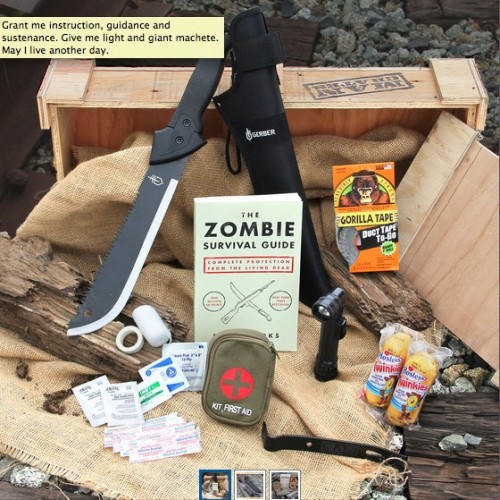 There is something infectious about the zombie craze. That same thrill of making it over a snowy mountain pass or coming safely home through a storm. It reminds me that I’m alive and capable of handling this thing we call life. Even the CDC keeps a zombie page active on their website. For beneath the veneer of fantasy there is an inescapable truth to the zombie story. As the CDC director, Dr. Ali Khan, reminds us, “If you are generally well equipped to deal with a zombie apocalypse you will be prepared for a hurricane, pandemic, earthquake, or terrorist attack.”  In that respect, I love zombies. Hopefully you’ll all go out and celebrate this feeling of accomplishment too this autumn.

*Pimp-ography- n. : The act of making a subject look transcendent through the medium of photography.