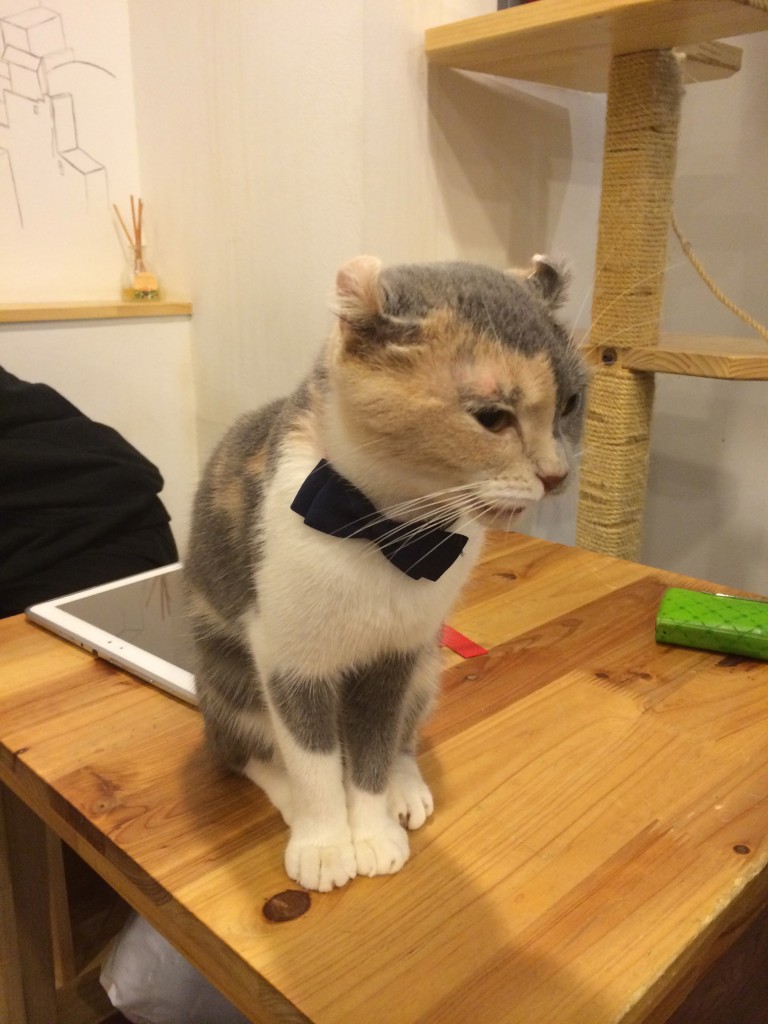 South Korea and Japan have started a new craze of cafes where one can go, get a cup of coffee, and seek companionship. Some cafes charge by the hour and some charge by the cup. When you first walk in it can be a little nerve-wracking. A dozen beautiful eyes all turn to appraise you when you walk in. At first, I was hesitant to spend money for company. The idea of a coffee shop that offers “a little more” was daunting. The one we went to in Seoul charges an entry fee of $7 that includes a cup of coffee (mochas, lattes, or drip.) From that point of you get to find a spot and try to seduce one of lounging figures perched on a bench to come sit in your lap. It’s sort of like dating at first. Since you’re not allowed to simply pick them up, you have to rely on your charm to get one of the finely dressed companions in your lap. If however you lack the prerequisite allure to charm a friend over to your table you can always throw a little money around. A $5 can of tuna will have a whole room of beauties eating out of your hand.

Such is the charm of a cat cafe.

What started as a quiet fad has exploded across Asia. In major metropolitan areas like Seoul and Tokyo it can be expensive to own a cat, or impossible depending on your apartment’s lease agreement. For many it’s simply easier to spend an afternoon in a cafe full of cats. Cat cafes in Korea are no stranger to traffic and the cats inside are pros at keeping people company. Tawny and I hadn’t been sitting down for more than a minute when we had a cat in one lap and another on the table.

The allure of the cat cafe isn’t just in its ability to provide “cat time” for the non cat owner. With a rigorous academic schedule and constant pressure for both high school and university students in the tightly wound hub of Seoul, cat cafes offer a chance to unwind and lower their blood pressure. Since most of these cat cafes focus as much on the coffee as the cats, these cafes make excellent study locations. It isn’t uncommon to see a group of students cramming for finals with a cat on their stack of books.

Most cat cafes host the same cast of cats again and again. Many people have favorites that they come to see. “Regulars”, if you will. There are a handful of cafes however that double as breeders and actually allow patrons to adopt cats that they bond with too much to let go. The cat cafe featured above is in Myeongdong, Seoul. You shouldn’t have any problem finding it since they usually have some guy dressed up in a giant cat suit outside to point the way.  Interestingly enough this cat cafe is also across the way from a dog cafe. Don’t get your hopes too high though. If you’re expecting huskies and labs you’ll be sorely disappointed. Most dog cafes in Korea feature Pomeranians and cocker spaniel themed dogs.

Personally, if it were up to me, I’d have a dog cafe that only had Jindo dogs. Clearly it would also only play K-Pop 24/7.

Any cat lover would be remiss to pass up a cat cafe while in Korea. It’s your chance to be a crazy cat person but with out the horrible social stigma.

What about you, cat cafe or dog cafe?

We want to know.

Captain & Clark
4
Tags :
cat cafesKoreasouth koreathings to do in Korea

4 thoughts on “Cat Cafes in Korea”