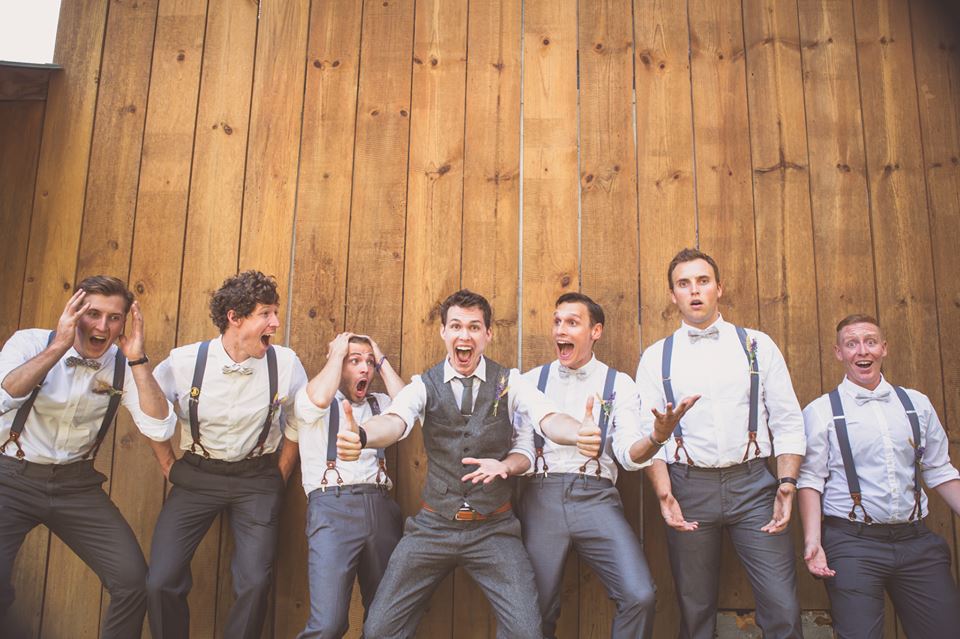 A Guy’s Guide to Vegas

Gentlemen, you might already be aware, but I want to let you all in on a secret: Las Vegas is a trap. Literally. It is designed by the same people who built the staircase in David Bowie’s “Labyrinth.” 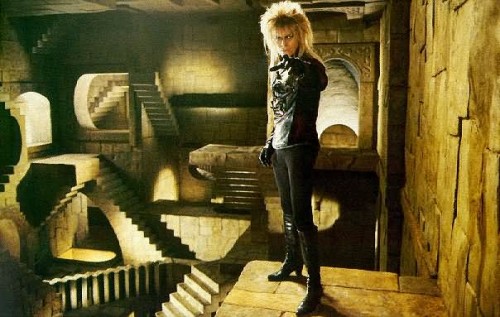 Photo Courtesy of PlanetPerplexIt’s a beautiful, wonderful, sticky trap designed to take all your money. Learn this well. No matter what you do, this city is going to reach inside your wallet and take a toll. However, this doesn’t have to be a bad thing. Not unlike getting mugged on the street, you have a level of control on how this goes down. You can hand your wallet over and have a good time, or you can resist and get shot. Think of Las Vegas like a good intentioned street mugger whose gun shoots Hep C.

This all occurred to me recently as Tawny went on her 4th bachelorette party and was telling me about everything she planned to do in Vegas. I was shocked. According to Tawny, all a girl has to do is get dressed up and walk around with her friends. They’ll get offered free drinks, free clubs, free limos, and all the pool parties they can handle. I’m sad to say, dear friends, that this plan of attack doesn’t work for men. We are specifically the targets of this kind of tom-foolery. So, in case you don’t look like this when you go out on the Strip… 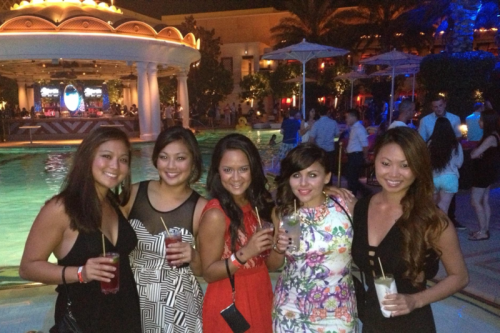 …here’s some helpful tips on how to get the most out of your guy’s weekend in the city of sin.

BEST DEALS FOR ACCOMMODATION IN VEGAS

Until the day I die, I will champion the merits of staying at the Wild Wild West. It is quite literally a five minute walk off the strip, costs about $25 a night, is next to Inn-n-Out burger, was featured in The Hangover and my frickin’ initials are in the concrete there.

If, however, you’re looking for something a little closer to the action and you still don’t want to break the bank, think about The Luxor or the Excalibur. Both continually run great deals. All three focus on my favorite end of the Strip too. Besides, who doesn’t want to stay in a giant castle-themed hotel? Bear in mind, the hotel doesn’t matter as much as the location. As long as you’re ready to walk, you can get pretty much anywhere you need to go in Vegas by the power of your own two feet.

Honestly, not just because of our long standing relationship with them, I prefer the Expedia App for finding a place to stay. The tricky part is that you get better deals if you wait until the last minute. The nice part is that you can find anywhere from 10% to 60% off for the night, find it on the map, and book it on your phone. All of my accommodation for the bachelor party I got on my phone. Just in case that isn’t sexy enough for you, consider that I got my room for under $20 a night. Which is awesome, considering that I used it like this.

BEST DEALS FOR ENTERTAINMENT IN VEGAS

You need to decide what you want before you go. I’ve got a time tested formula that basically boils down all the reasons people go to Vegas into five categories. 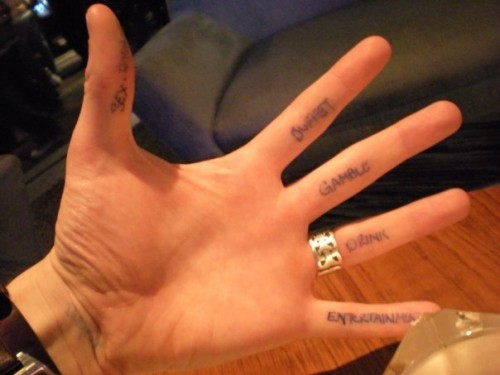 For men it breaks down into: women, buffets, gambling, drinking, and entertainment. Obviously, those should all be on a Venn Diagram and not just written on your fingers. Still, desperate times call for brilliant measures. A lot of young men get tricked into the siren’s den of strip clubs when they go down to Vegas. Let me tell you, as a planner of many a bachelor party in my day, I have to advise against this. It isn’t just the fact that I’m a happily married man, but boobs are a plentiful resource in Las Vegas. You shouldn’t be getting charged a premium amount. It’s like buying bottled water… it comes from a tap for free. Let’s do some simple arithmetic here so that we can break down empirically what you’re getting.

Let’s say you go to Fantasy at the Luxor. You get your beer and a topless review for about $45.  If you go to one of the numerous off the strip clubs you’ll pay: $15 cover charge+$20 a dance+$40-$60 tips= eternal disappointment. Better to just look for the places where you can make memories without paying a month’s salary for it. For under $50 you can see the talented ladies of Fantasy and have a drink. That fulfills two of the five criteria. If you’d rather be gambling and spending your time with beautiful women, then head over to the Pleasure Pit in Planet Hollywood.

This gambling pit has all of their dealers in bustiers and most tables have elevated platforms for go-go dancers. So… yeah, that exists.

Personally, here are my recommendations for the top ten deals in Vegas. I’ll even be so kind as to break them down with those sexy little $ symbols that Yelp likes to throw around. Let’s say $$$$=Expensive for our budget traveler taste and $ is just right.

Las Vegas Indoor Skydiving $$$ – Let’s just say that short of jumping out of a plane you won’t find another experience like this. You suit up in a giant flying squirrel jump uniform and then stand on a mesh trampoline over a jet engine. Every single bit as cool as it sounds. Somewhere between the Matrix and ConAir.

Sunbuggy $$$ – If you’re heart has a hankering for speed, then jump on a custom-made sand buggy and fly over sand dunes blind as you try to catch the lead car. Every time I’ve saddled up with their Vegas cowboys, I’ve come home sore from trying to hold the wheel as I fly through the desert. The best part is thst they just opened a night chase. Now you can race through the dunes with only the power of a supreme LED bar to guide you.

Tournament of Kings $$ – Care for dinner and a show, m’lord? Well you’re in luck. I won’t tell you that the battle scenes are incredible, or that the knights that ride full tilt at one another are star performers… but if you factor in that your ticket price gets you a plate with a Cornish game hen and a biscuit that you eat with your hands, then you have a deal. Add a bucket of beers and a sexy dancing gypsy on the table next to you and now it’s a good time. Each section is also broken up into a kingdom and you get to cheer for whichever king you’re now a subject of. Since the winner is different every night, the tension is palpable. 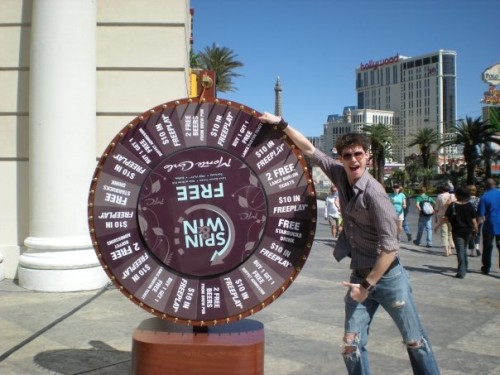 Walking the Street – You’d be surprised at the amount of free stuff you can pick up by just walking the Strip. Remember our initial premise here. The Strip is designed to pull you inside. The fact that you are outside of it will enrage the beast and a slew of snappy-dressing men and women will try to seduce you into the casinos with free meals, free spins, and booty shorts. Use your discretion here, but you can usually get a free beer and a hotdog out of this array of wealth. Just keep your wits about you and avoid the Sirens at the Treasure Island Casino.

BEST DEALS FOR FOOD AND DRINK IN LAS VEGAS 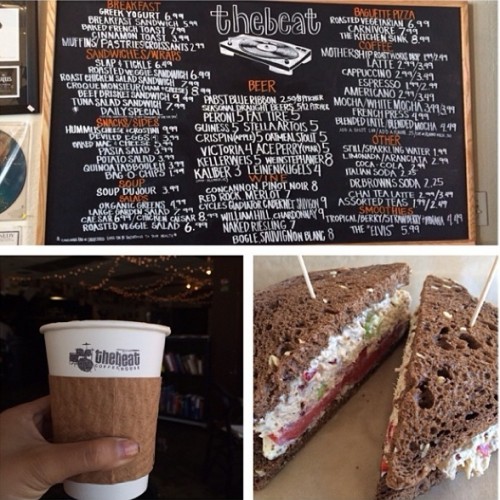 Beat Coffee House $ – This sexy little cafe is the perfect place to nurse your hangover. They serve wicked coffee and sandwiches like the Slap and Tickle (peanut butter, jelly, and jalapenos). They also double as a vintage record shop. So, it’s all the indie delight you can handle in a single session.

Pub 1842 $$ – For the best pub food and help for the morning after, you’ve got to check out PUB 1842 in the MGM Grand. Let’s face it, if a Solo cup is a chalice for you and beer pong is an Olympic sport, than you’re with the rest of us and nachos are a staple of your cooking repertoire. Well forget what you know. PUB 1842 has taken nachos to the extreme and made them a gourmet item. For a price that’s easy on the wallet and a wait staff that’s easy on the eyes you can’t do better.

Sin City Ales $ – One of the easiest ways to go broke in Las Vegas is to pay for drinks. Just on the off chance that a $24 martini isn’t your beverage of choice, you might want to find some other options. Personally, as Tawny is off using her good looks to score free booze, I choose to drink at Sin City Ale bars. There is a Sin City bar in the Venetian, the Flamingo, and (my personal favorite) Planet Hollywood. Each of them offers a range of Vegas brewed beers that will hit harder than a black jack table and will leave you with even more in your wallet. 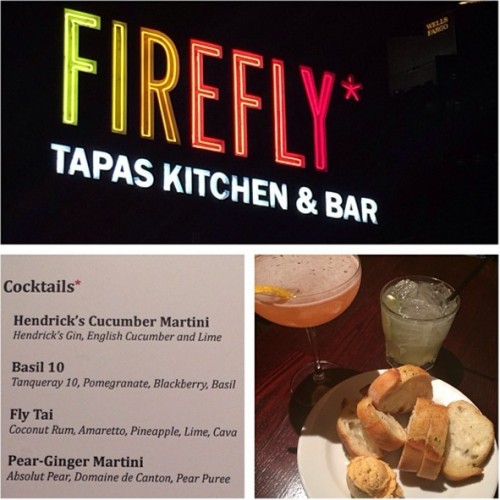 Firefly Tapas $ – The single best meal you can find in Vegas. Truly, the place that the locals go. This tapas bar serves wicked cocktails and smoldering tapas that are fried, chilled, pan seared, and all latin inspired. It’s as soothing to the eye as it is the stomach and it will make you feel as though you’ve hit the jackpot when you go to pay.

T&T $$ – Tacos and Tequila gets an honorable mention, just for the chipotle and pineapple margarita (herradura silver tequila and dutch orange curaçao shaken with fresh lime and pineapple juice, monin pineapple chipotle syrup, and a dash of tabasco chipotle hot sauce. served on the rocks.) However, it is also home to the best Caesar salad on the strip. Without a doubt.

Bear in mind, gentle sirs, this is only a sample platter of all the joy one can encounter in Vegas. Let’s pretend that this is my guide for the first timer. Gentle words of wisdom from a man who has earned his stripes on the bitter concrete of the City of Sin. Really. Last time I was there… I mean… a friend I know… last time he was in Vegas, he might have ended up celebrating his last days of single-life by pretending that he was a turbo charged Subaru WRX and trying to drag race cars. After executing a flawless high-speed weave of the cones in front of the MGM Grand, to which a cab driver later commented “He did well,” this friend tried to pull into the Inn-n-Out Burger parking lot when the lights came on.  This friend of mine might have been pulled over by the cops, while on foot, making car sounds. I’ll leave you with the words of wisdom that that officer gave to “my friend.” He said, “You’re a grown ass man, you can do what you want. Don’t let this place take you down.”

When you want to combine work with travel, these two Cloud services are precious – online Windows Desktop from CloudDesktopOnline.com and online portal to share files, calendars, contacts, and tasks from CloudAppsPortal.com . What happens in the Cloud stays in the Cloud.

Strong words, from a strong man. Enjoy Vegas, gents, but beware Her many wiles.

Have a Vegas story? Do tell.

Some content has been sponsored but our opinions are our own.

7 thoughts on “A Guy’s Guide to Vegas”