To be perfectly honest, I have no idea how many times I have visited Maui. Although you might think the reason is because I’ve been to the island more times than I can count, the reality is that I have only been once as an adult and a few times as a child. How many ..." />
Travel News

Where we slept. Maui edition.

To be perfectly honest, I have no idea how many times I have visited Maui. Although you might think the reason is because I’ve been to the island more times than I can count, the reality is that I have only been once as an adult and a few times as a child. How many times as a child? I have no idea. I know I went once for my great-grandmother’s funeral and maybe a handful of times after. Maybe.

You see, there’s only been one trip to Maui that I remember-and barely at that. It was a butter and booze-filled vacation to Maui that lasted a couple of days to celebrate the big 3-0 of one Traveling Philosopher. We were only on the island for a few days and we didn’t stray far from Lahaina. Instead of staying in a hotel, we decided to rent an adorable house (complete with hot tub and huge backyard) where we barbecued, tanned, and enjoyed our down time on the island. While I loved every minute from that trip, it’s safe to say that we didn’t really get out to explore much of Maui.

This time was going to be different. We were hooked up for the Maui Visitor’s Bureau #seeMaui campaign. Chris and I had the privilege of staying at two of the island’s prized hotels: The Grand Wailea and The Ritz-Carlton, Kapalua. Now, a little back story on Chris. The captain had also been to Maui twice before, the last time being when we were there for the birthday shenanigans however, the first time he set foot on the island was for a conference that his mother was attending when we was a wee boy. The only thing that Chris could recollect from his vacation to Maui was an awesome hotel water park that included a lazy river and water elevator (whatever that even is). Knowing Chris, I thought that he made up this whole magical water park in his creative imagination but he seemed to bring it up every time we encountered a hotel with a sub par pool.

Well, spoiler alert. This water park of dreams does exist and just so happens to be at the Grand Wailea. We’ll spill all of the juicy deets below. 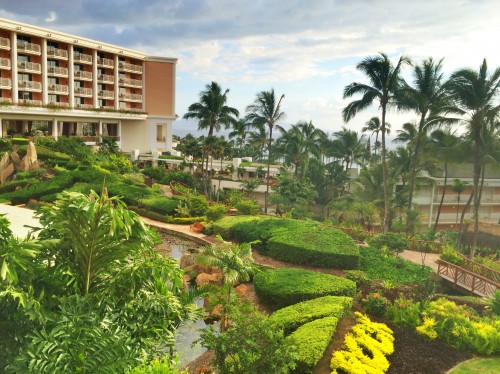 The view from our room at the Grand Wailea

There’s a lot that can be said for this paradise within paradise. The Grand Wailea offers a little something for everyone. While some might enjoy the 20+ shops, beautiful Botero collection, or the three (count ’em, three) championship golf courses, we concluded that our two favorite aspects of the Grand Wailea are its spa (in particular the Terme, which we’ll get to later) and the ridiculous water park.

Now, as I previously mentioned, this just isn’t your regular run-of-the-mill hotel pool. No my friends, this is a water park that caters to children and adults alike. Nine pools on six different levels are connected by a river that features a lazy current and titillating rapids. Grab a floaty and kick back as the river takes you around the park. If you’re of age, float to the swim-up bar and order yourself a fruity Hawaiian cocktail.

If you want to enjoy the water without the shrills of gleeful children in your ears (but also sans lazy river), head to the Hibiscus pool. This pool (and two jacuzzis) are reserved for the 18 and older crowd. If you want to get real fancy you can even reserve a cabana for your day at the pool.

Speaking of relaxation, the Grand Wailea’s Spa Grande has been voted one of the top 10 spas in the United States by Condé Nast Traveler and Travel & Leisure magazines. While skeptical at first, I was soon won over… and that was before I even stepped foot into my treatment room. Spa Grande offers its patrons what it refers to as a “terme.” An hour before my rhythmic lomi lomi massage, I found myself entering a Roman-like bath house complete with soaking tubs, saunas, massaging waterfalls, and Swiss jet showers. I thoroughly enjoyed the five specialty baths that were Hawaiian island themed. My favorite was the Oahu bath (sure, I’m biased. It’s the island of my birth), which contains a blend of bamboo green sea salt, Hawaii spirulina, and organic seaweed powder. The benefits of this bath are to help tighten the skin, reduce the appearance of cellulite and relieve fluid retention – what’s not to love? 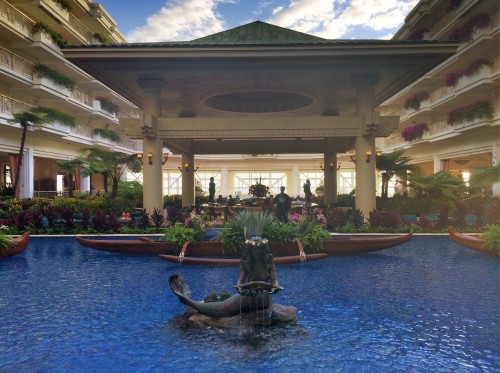 Continuing the theme of water, we found ourselves drawn to the mermaid fountain situated front and center of the property. Legend has it that if you make a wish, throw a coin, and successfully make said coin into the mermaid’s shell, your wish will come true. Chris and I both made it into the shell and while it’s bad luck to tell you what I wished for, let’s just say that I’m fully anticipating a return to the Grand Wailea in the near future. 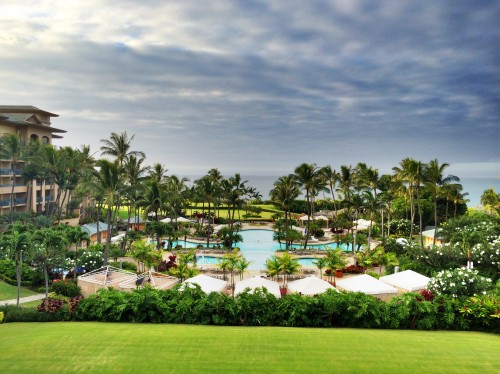 Greeted by this sight at the Ritz-Carlton

The second half of our stay on Maui was spent at the welcoming Ritz-Carlton in Kapalua. There are some hotels that just smell incredible as soon as you’re on the premises and this is one of them. I don’t know if they pump some hibiscus-plumeria scent through the vents, but this place smelled heavenly.

OK, enough about the smell. What we loved most about this hotel was its friendly staff and its dedication to preserving Hawaiian culture. Let’s start with the fact that every single employee that we encountered greeted us with either a warm “aloha” or “how are you.” We even had a full conversation in the hallway with an employee who seemed generally interested in how our day went. Talk about the aloha spirit.

Upon first arriving to the hotel one might wonder why it isn’t situated directly on the beach like most hotels on the island. We learned that once construction started on the Ritz-Carlton, ancient bones were unearthed and discovered. Instead on infiltrating this sacred land of Hawaiian ancestry, it was decided to preserve the burial grounds and build the hotel a little farther back. We applaud the decision to forgo the beachfront property in order to protect cultural lands. Dumbledore would award at least a bazillion points to the Ritz-Carlton. If you feel like you’ll miss having the beach near, never fear! It’s an easy walk from the hotel and is a great launching point for kayaking and canoeing. 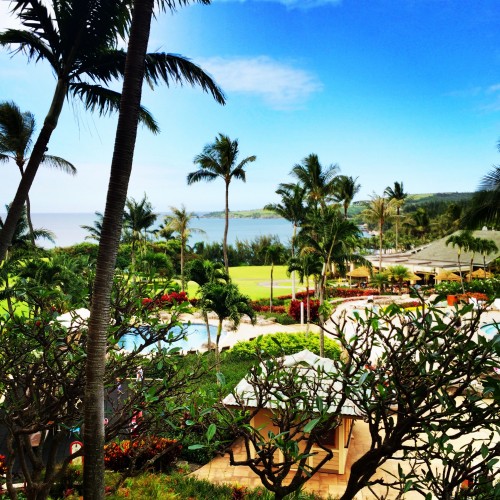 The view from our room at the Ritz-Carlton

If there’s one thing we have to recommend for visitors to the Ritz-Carlton-and, well Maui in general-it is Kai Sushi restaurant. Award-winning Chef Tadashi Yoshino served up some of the finest grade sushi and sashimi we have ever laid eyes on. Menu items even cater to those that might have an aversion or allergies to seafood, like moi.  The braised shortrib potsticker practically dissolved in my mouth. Chris, on the other hand, ate exotic roll after roll and later declared that it was the best meal of his life. Now that’s high praise. 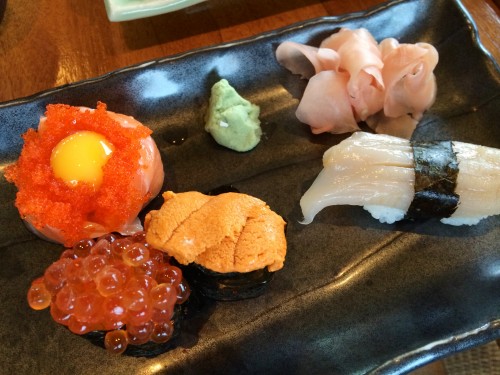 One (out of many) of Chris’ sushi-laden plates.

The next time you find yourself in Maui, treat yourself to a stay at either The Grand Wailea or The Ritz-Carlton Kapalua. Between the crazy water parks, mind blowing food, and cultural integrity, what’s not to love?

Have you been to Maui? Where did you stay? We would love to hear your stories in the comment section below.

A big mahalo the Maui Visitors Bureau for hosting us while on Maui. As always, our thoughts and opinions are our own.