It is that glorious time of year again. Beer begins to flow like autumn rain and the winds of change are heavy with the rich scent of bratwurst and sauerkraut. It is Oktoberfest. For those of you who can’t make it to Munich, it’s okay, we have an alternative. Deep in the emerald heart of ..." />
Travel News

It is that glorious time of year again. Beer begins to flow like autumn rain and the winds of change are heavy with the rich scent of bratwurst and sauerkraut. It is Oktoberfest. For those of you who can’t make it to Munich, it’s okay, we have an alternative. Deep in the emerald heart of the Cascade mountains in Washington state, there is a tiny Bavarian theme town known as Leavenworth. After its brush with becoming a ghost town in the ’60s, Leavenworth’s council had the brilliant idea to turn the small town into a tourist’s dream. Since then, the dirndls and lederhosen have bejeweled this tiny town.

The Bavarian spirit in ubiquitous throughout the year, but never is it so thick as in October. The first three weekends of October have been set aside for the celebration of Oktoberfest. Tawny and I suited up recently and delved into the beer culture of Bavaria. 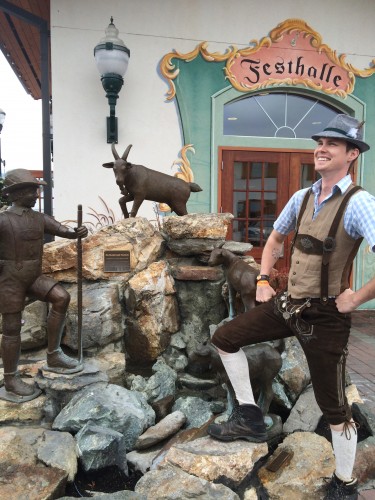 Things you should know before you go to Oktoberfest in Leavenworth:

1.) You can pay online, but it might not help

When we arrived to the fenced off area that oozed oompa music, we were confronted by two lines. One for those who paid in advance, another for those of us whom like to wait until the last minute. They were the same length and moved at the same slow pace. The thing that slows you up is the metal detectors at the gate. The powers that be don’t allow weapons or outside booze, for obvious reasons. However, be warned, the only accept cash at the gate.

2.) It costs more on Saturdays

It isn’t common knowledge, but tickets cost $10 on Friday, and $20 on Saturday. Be prepared.

Upon entering the great arena, you will have already encountered so many options of things to buy. Massive beer steins and giant glass boots will be lined up along the bratwurst stands and giant pretzels. The stands all accept tickets, most of them exclusively. Throughout the Oktoberfest area there are several ticket stands. When you arrive, you’ll exchange cash for tickets, which is the currency used on the grounds.

This is your moment to shine! The Oktoberfest outfits range the whole gamut from scandalous to traditional. No matter if you prefer the traditional lederhosen (leather overall-like pants) or the the adorable dirndl (the lady’s Bavarian dress) or even a Gumby outfit, all are welcome. Don’t be shy. Those of you with costumes will be in the welcomed majority. 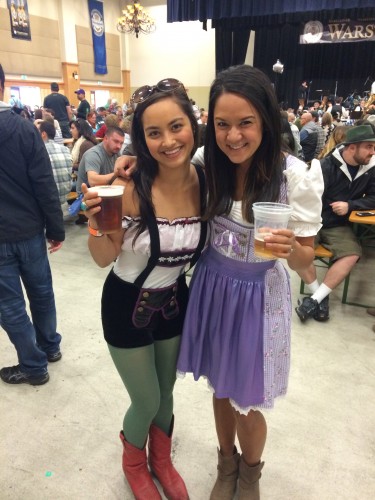 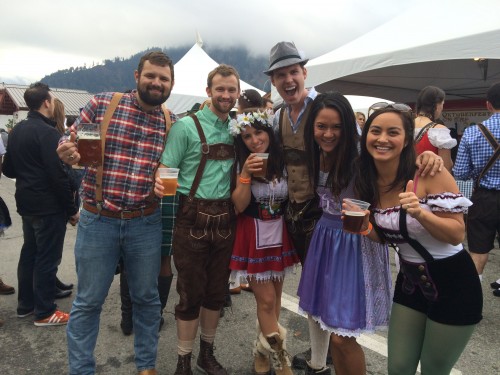 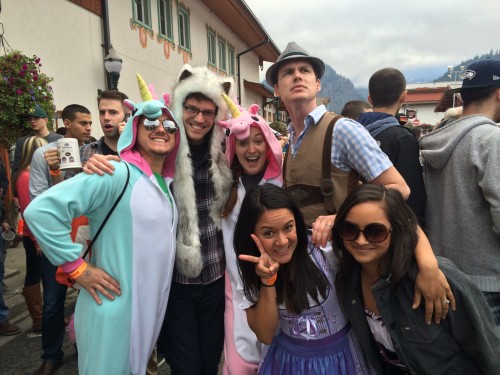 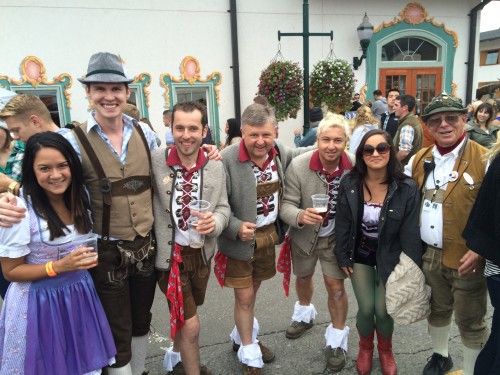 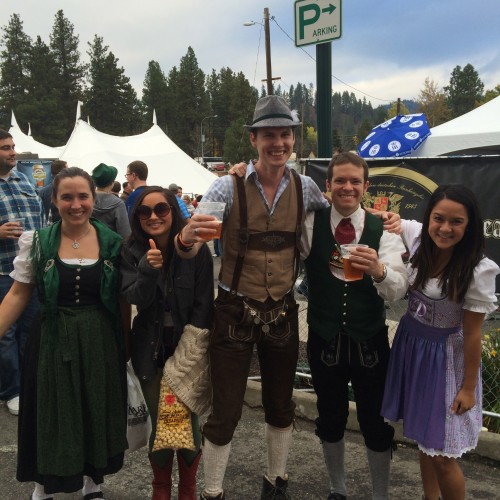 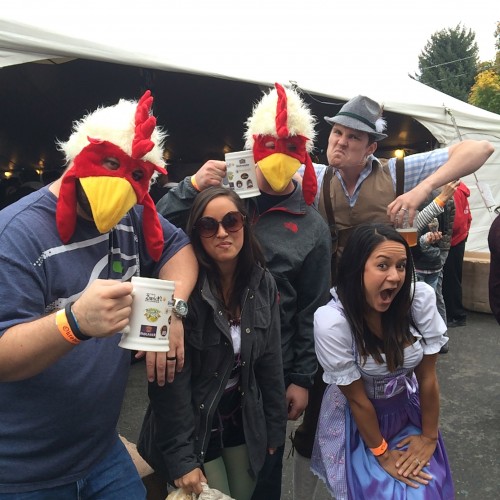 Not unlike the Munich Oktoberfest, the best way to enjoy this affair is to grab a beer and find a tent. We found three large beer tents, each with a different band playing. If you’re looking for a polka or a German rock band, you’re in the right spot. We ended up stuffing our faces with sausage and turkey legs, all the while drinking steins of beer. The beer selection, while not as extensive as its Munich cousin, is really good. Leavenworth goes out of its way to bring German brews in to the event. (Don’t worry, the fest provides complimentary shuttles so you needn’t distress about drinking too much.) So, if you can’t find a way to make it to Munich, the Leavenworth Oktoberfest is a wunderbar option. 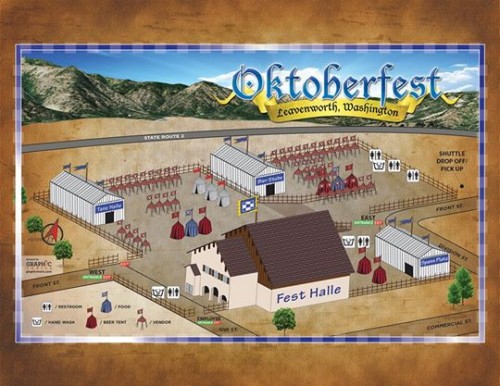 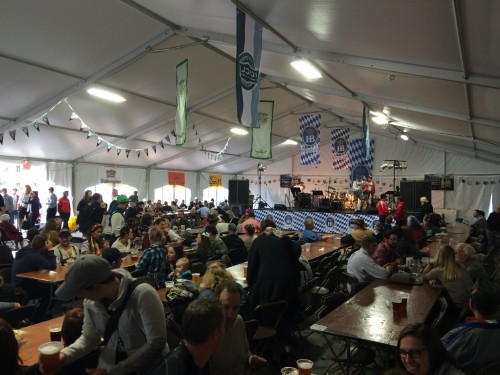 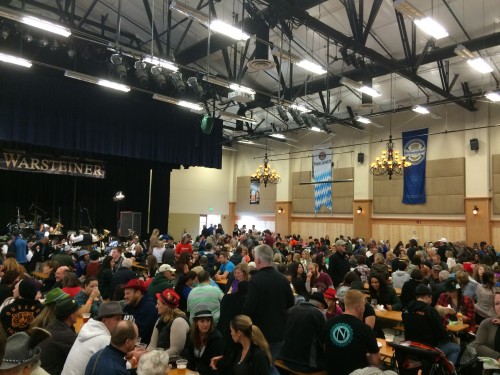 Tawny and I took our dear cousins out for a birthday weekend. Decked out to the nines in lederhosen and dirndls, we pumped “Das Boot” for the whole 3-hour ride from Tacoma. Not familiar with the hot tune? Check it out. Heads up, it has nothing to do with a German submarine. 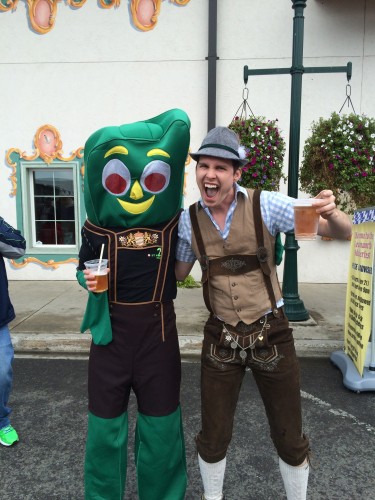 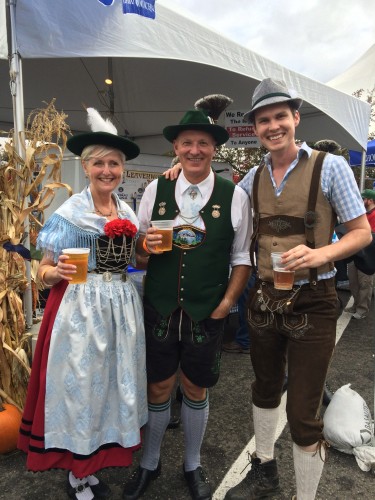 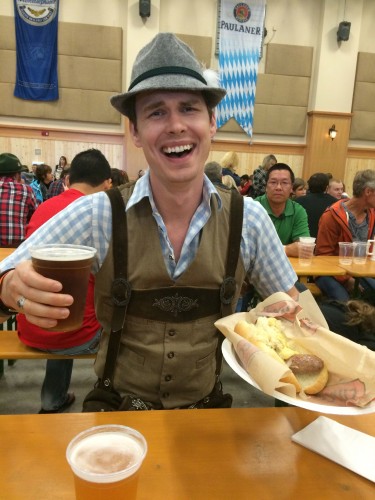 I know, it will be hard to wait, but make sure you plan ahead and get ready for Oktoberfest in Leavenworth. The festival grounds only take up a small portion of the township. The rest of this Bavarian dream town is still rocking with a wide variety of activities and plenty of hiking to get in to. Be sure to book yourself a whole weekend and do so in advance  (rooms fill up early for the event). The good news is that it is worth every second! 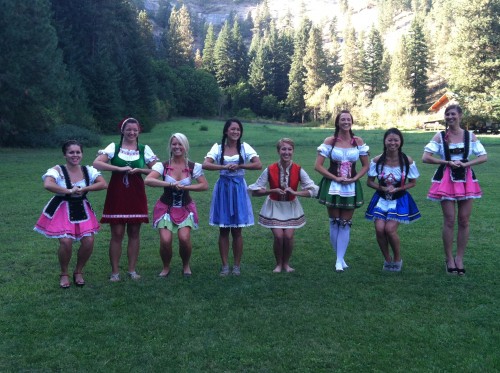 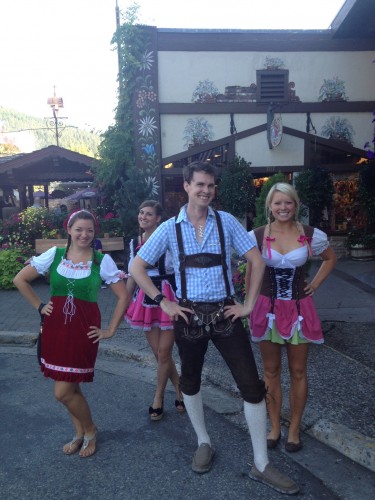