It was cold. It was dark. I glanced at the screen on my phone and it was already past 10PM. As our guide handed me my life jacket I began to wonder what exactly I was gearing myself up for. Would we even be able to see anything? It was our second night in Latvia’s ..." />
Travel News

It was cold. It was dark. I glanced at the screen on my phone and it was already past 10PM. As our guide handed me my life jacket I began to wonder what exactly I was gearing myself up for. Would we even be able to see anything?

It was our second night in Latvia’s capital city of Riga and our group had already covered most of the city by foot. Tonight, however, we were going to do one of Riga’s top activities a little differently. We were going to kayak. At night.

We were picked up from the front of the iconic St. Peter’s church in the heart of Riga. A fifteen minute drive found us outside of a wooden shack along the Daugava river. Our group of JayWay Travel bloggers was paired off and after a brief introduction to the art of kayaking (paddling, in particular), we were suited with our vessels for the night. 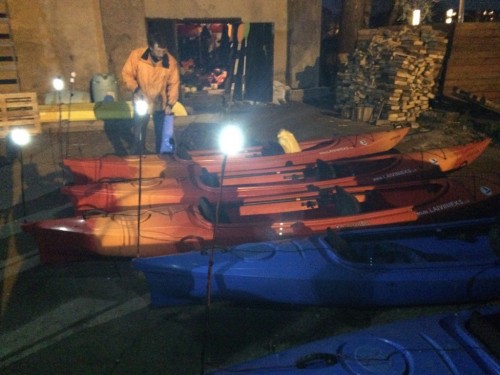 Truth be told, I was a little nervous. It wasn’t because of the cold or dark, but mostly due to the fact that Chris and I would be sharing a kayak. If there’s one thing I’ve learned, two-person couple sports can often end in disaster. Don’t even get me started on the bicycle-built-for-two catastrophe of 2009. Communication and patience were definitely going to be key.

We boarded our kayak and after five minutes of practice in the small bay, calibrating our strokes through the water, we felt ready to hit the river. As if to mark our small success, fireworks went off in the background. Our fellow adventurers watched with awe until everyone was in the water and felt comfortable enough proceed.

The Daugava river (also referred to as the “river of fate”) is 635 miles long and was an important trading route for furs in medieval times. Our roughly three hour tour started with us paddling north on the river. And while I was terrified by kayaking in the dark on what seemed like a rather large body of water, I enjoyed the serenity of watching the world go by as we quietly sailed on the water. 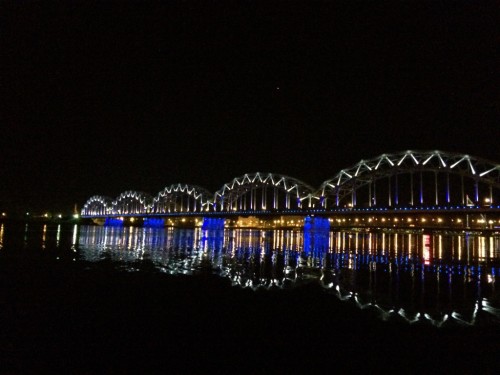 A few kilometers on the water found as at the entrance to the city’s canals. You probably remember that it was only a few days prior that we feasted on a certain rodent in Estonia. Imagine my surprise when we rounded a corner on the canal and spotted a large beaver on our starboard side. It was much bigger than I expected it to be and didn’t seem to mind us too much. He would pop up around our kayak before disappearing into the water. We ended up spotting at least four more as we paddled along the quiet banks of the canal.

Exploring the canals at night offer unique views that you won’t get in the daylight. It’s much more quiet with less distraction. It allows you to take in more of the city and really appreciate its beauty. 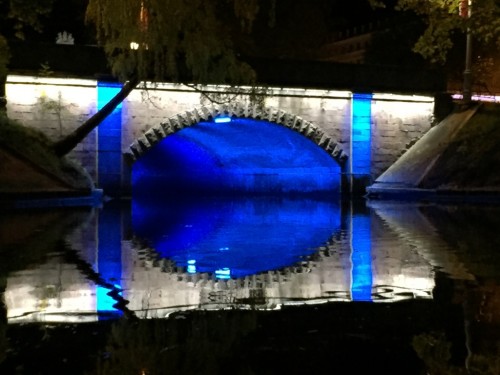 The bridges we came across were lit in a multitude of colors (although I somehow only captured them while blue), making our trip picturesque and not as creepy as I initially thought it would be. My favorite parts of the canal were being able to see the iconic sights of Riga from a new perspective. The old zeppelin hangars that make up the city’s Central Market were eerily quiet; such a stark contrast from our walk through just hours before. 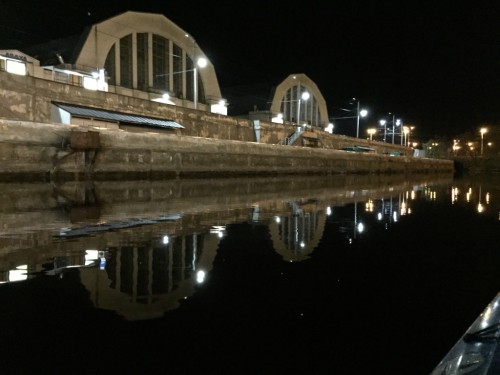 The night ended with a challenge. To see who could reach a finish line beacon first. Of course, being in the same kayak as one of the most competitive people on the planet, we immediately set off through the water.

Unbeknownest to me, my skills (or lack thereof) resulted in Chris sporting sopping pants for the remainder of the night. But the good news? We definitely won. 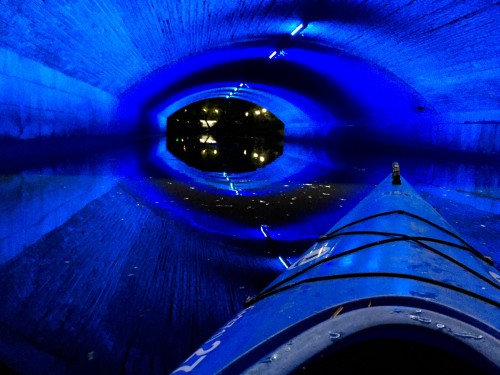 Know before you go:

Dress accordingly. Even though it was May when we were in Riga, the weather was still temperamental and dipped at night. We would recommend bringing gloves and a hat to help keep you warm. If you’re planning on going in the colder months, be sure to wear multiple layers.

You don’t have to worry about finding the launching dock. Pick up and drop off is provided by your outfitter and JayWay Travel will be happy to book these activities for you.

No previous experience is required. Our guide was great about setting the pace for our entire group of novices.

Bring a waterproof camera to capture your memories. If you don’t have a waterproof camera, consider buying a dry sack that you can take along with you. That way you’ll be able to keep your valuables safe from the water. I happened to have a ziplock back on me that I used to store my phone.

Would you try night kayaking? What are other activities that you’ve done at night? We’d love to hear your stories in the comment section below. 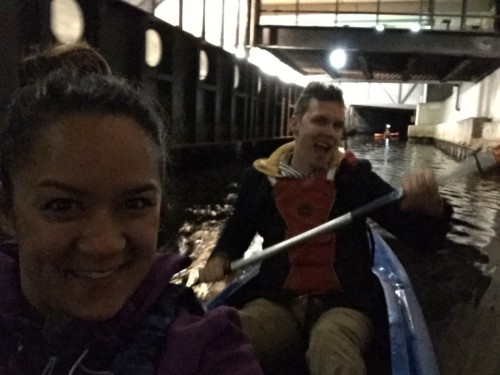 This unique activity was sponsored by JayWay Travel as part of our tour through the Baltics. As always, thoughts and opinions remain our own.