I was naked. My ears were stuffed with a high-tech wax. In front of me there was a long coffin-shaped box with a space shuttle hatch on the front. Inside it looked like one of the tubes that they put people in cyrostasis for space travel. I took a deep breath, climbed into the hatch, ..." />
Travel News

Our Experience with the Sensory Deprivation Tank

I was naked. My ears were stuffed with a high-tech wax. In front of me there was a long coffin-shaped box with a space shuttle hatch on the front. Inside it looked like one of the tubes that they put people in cyrostasis for space travel. I took a deep breath, climbed into the hatch, and sealed it behind me. All around me was super dense salt water about a foot deep, and no light at all. 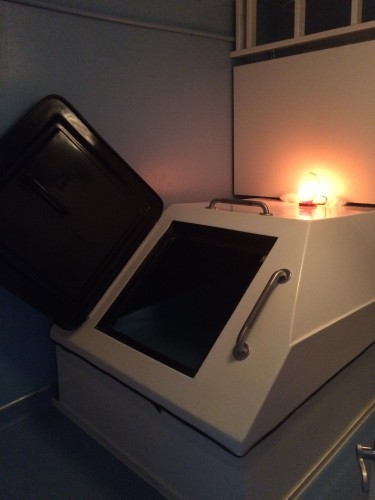 This was how the greatest dread and highest high of my life began.

You might think that I was gearing up for space travel, and in a sense you’d be right. This was our foray into sensory deprivation, or “floating” as the kids are calling it these day.

Have you ever wanted to experience weightlessness? Do you want to jump through the looking-glass of your own mind and experience a trip without drugs? Well, we have something for you. This was by far the most fascinating trip we’ve ever taken without leaving our home coast.

– You are weightless: There is over 850 lbs of Epsom salt in the water. When you lie back you float like an apple in a bucket. It feels like you’re drifting through space.

– You lose track of your own body: The water is heated to 93.5 degrees Fahrenheit. The result is water that is “skin-receptor neutral” meaning that after a few minutes you lose the ability to tell where you end and the water begins.

– There is NO light: The chamber is perfectly dark.

– You’re naked: This was a surprise for me, but you float solo, in a dark chamber, in a private room. So, chill, it’s worth it. 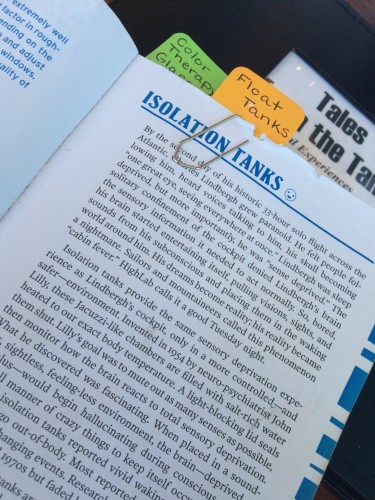 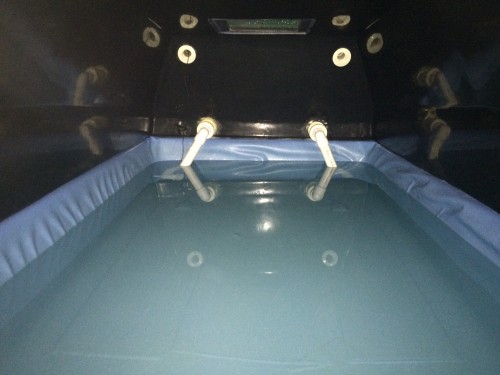 The first four minutes were full of absolute dread. You would think that it would be claustrophobia but it was in fact the exact opposite. I couldn’t see, hear, or feel anything. When I opened my eyes it was pitch black. I took a deep breath and laid back, wiling myself to relax. For those first few minutes I had to hold my hands behind my head because my shoulders ached so badly. I hadn’t realized how much tension I had been carrying in them. It took, what I assume was, ten minutes for them to unwind and I could float without any tension at all.

I could feel myself unwind, and start to relax inch by inch. 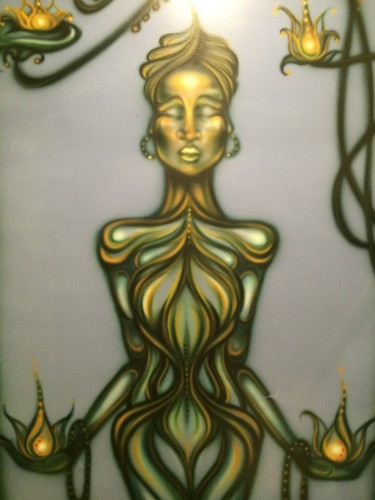 My mind started to wander. Completely uninhibited, it spun off. I was warm, and there was nothing at all to distract me. You really do start to lose track of where your hands and feet are because the water feels so similar to your own finger tips after a while. Sort of like you’re melting into it. Even the water doesn’t feel anything like normal water. Not really. It feels more like you are being pushed upwards. The salt solution is so buoyant that it actually repels you from sinking at all. You drift.

I would love to tell you that I thought long and hard about many deep subjects. Tawny did. After her float she was aglow with new ideas and pitches and she could hardly wait to write them all down. Me? I went to some secret animal part of my brain. It felt like I was a wild mountain cat running through my own head. Strangely serene, despite how it sounds. Like a cougar on a misty morning.

It only felt like a few minutes but we floated for an hour and a half. The minimum time for a float. Soft music gets pumped into your chamber when your time is up and you sort of gently drift back to reality. You jump out, shower, get changed and emerge reborn into the world.

I felt younger. It was like the high after a great massage or a long sleep. All the tension in my shoulders was gone and it felt like my senses were electric. The water bar in the lobby was the most delicious thing I had tasted in days. Lemon water tasted like fine booze all of a sudden.

If you get the chance, you have to try one.

Have you floated before? Let us know about it in the comments below? Tell us if it compares to the Dead Sea.