A weekend trip to L.A. with baby

We just returned back from our super quick weekend trip to Los Angeles. We needed a trip down south to escape the dreary Washington winter, but also mainly to spend time with our friend Carol (Girl Gone Travel) and her beautiful family.

As is our tradition, as soon as we landed and picked up our rental car, we headed straight to In-N-Out. Chris and I were both extremely hungry and couldn’t wait to get our hands on some food. It seemed like everyone else arriving to LAX had the same idea as there was a giant line out of the parking lot. Luckily, the line moved quickly and we distracted ourselves by watching half a dozen planes fly right over our car as they were headed for a landing. This is one of the best locations for both plane spotting and milkshake imbibing. Trust us. 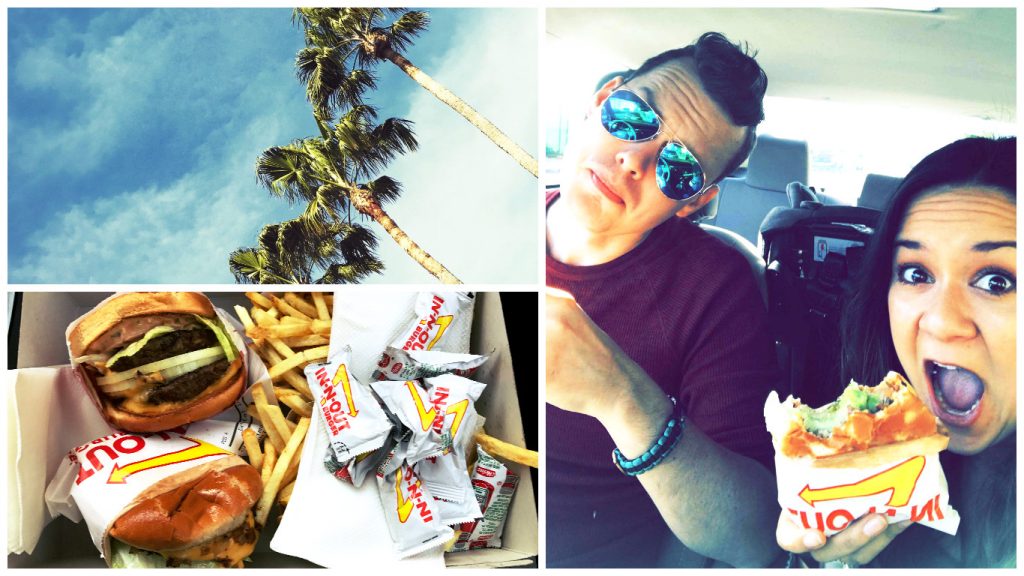 After we were satiated, we saddled up and headed to our hotel. While I really wanted to stay at a boutique hotel like The Line Hotel or Farmer’s Daughter (arguably two of the most hipster hotels in town), we had to fly out at the crack of dawn on Sunday and decided to stay close to the airport. Culver City seemed like a good option and we ended up using Expedia points to book a stay at the local DoubleTree by Hilton. The hotel was a typical DoubleTree but the room was huge, a crib was already set up upon arrival, and we were given freshly baked cookies (still warm!) upon check-in.

Um, and let’s just talk about this guy for one second. He looks a little too comfortable with the hotel life. Well, with the exception of him hating his crib. He slept in it for all of twenty minutes. 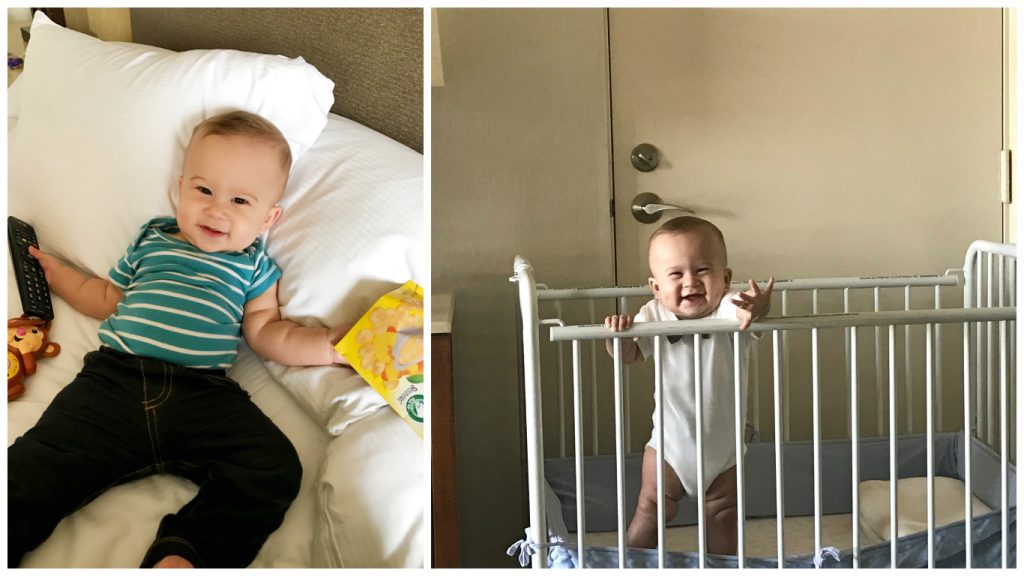 After checking in, we got in touch with Carol and decided to rendezvous with her and the family at Venice Beach. While we had stayed at Carol’s house in New Jersey last fall, her husband Travis was out of town for our entire visit. We were thrilled to finally meet him in person. Those two are major #couplegoals.

We didn’t stay in Venice Beach for too long, but we were able to watch the sunset and take photos as proof of our meeting. We ended the night at Carol’s brother’s house where we were welcomed with open arms. Let me tell you, there’s nothing like a Dominican/Persian “small family gathering” to cap off a day of L.A. exploration. 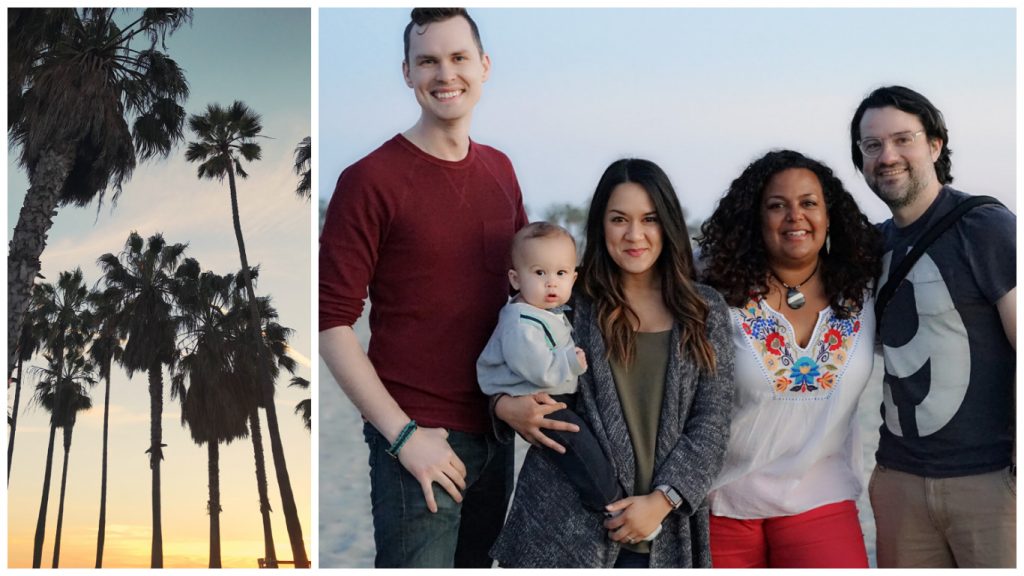 Day two was our only full day in LA and was jam packed with food, adventure, and fun. We decided to meet up with Carol + fam in the Arts District. Brunch was at Zinc and consisted of espressos, breakfast bowls, warm muffins, avocado toast, and a sliced orange for Holden. Chris technically had two breakfasts since he bought (and thoroughly enjoyed) a Cave Shake while we were waiting for the Cain clan to arrive. 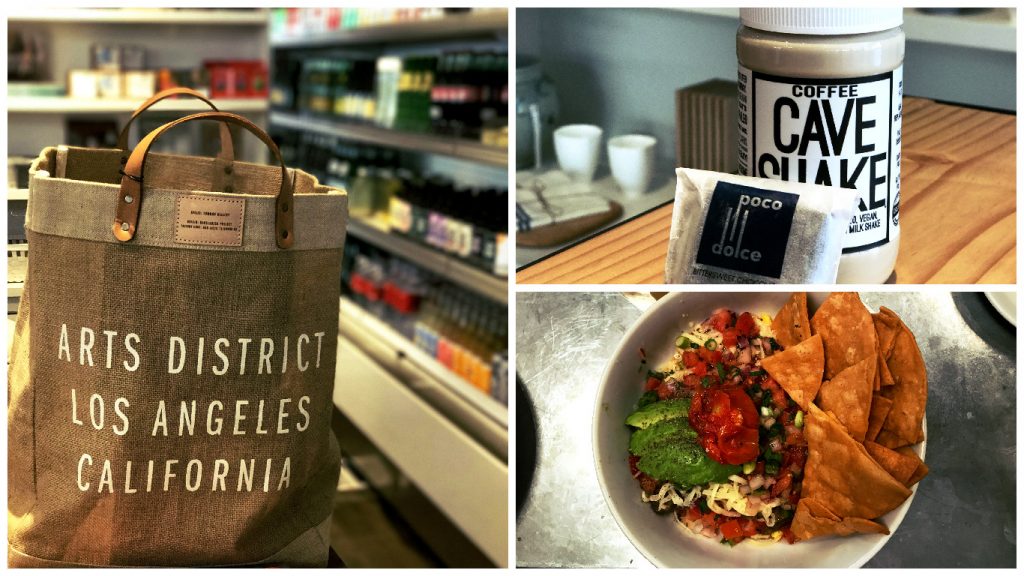 We decided to work off our brunch with a walk around the Arts District. Honestly, it reminded me of a grittier version of Oahu’s Kaka’ako district. As you probably know, we’re suckers for street art and it is everywhere in the Arts District. We’re also suckers for free gin tastings and might have stopped in for a sip or two at The Spirit Guild.

Also, side note: men that wear babies are ridiculously hot. 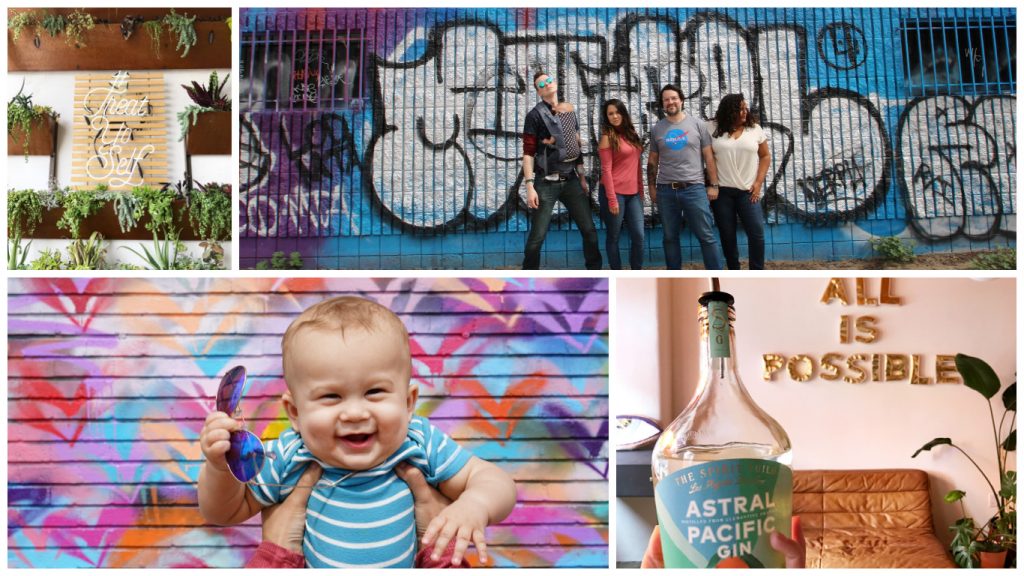 Since we only had hours to fit in as much L.A. as possible, we high tailed it out of the Arts District and headed towards Koreatown. Even though we ended up not staying at The Line, I still wanted to check out the hotel’s greenhouse restaurant. The Commissary is the eatery of my dreams. If we didn’t travel as often as we do and if I could keep more than my succulents alive, our house would look like this restaurant. Green plants and vines were dangling in planters from the ceiling, tiny flowers in vases were on the tables, and small trees and bushes lined the entire greenhouse.

Everyone was still full from brunch and not in the mood for food, but we ended up hanging by the pool outside the greenhouse. I made a point of soaking up as much vitamin D as possible while Holden schmoozed with everyone in sight. 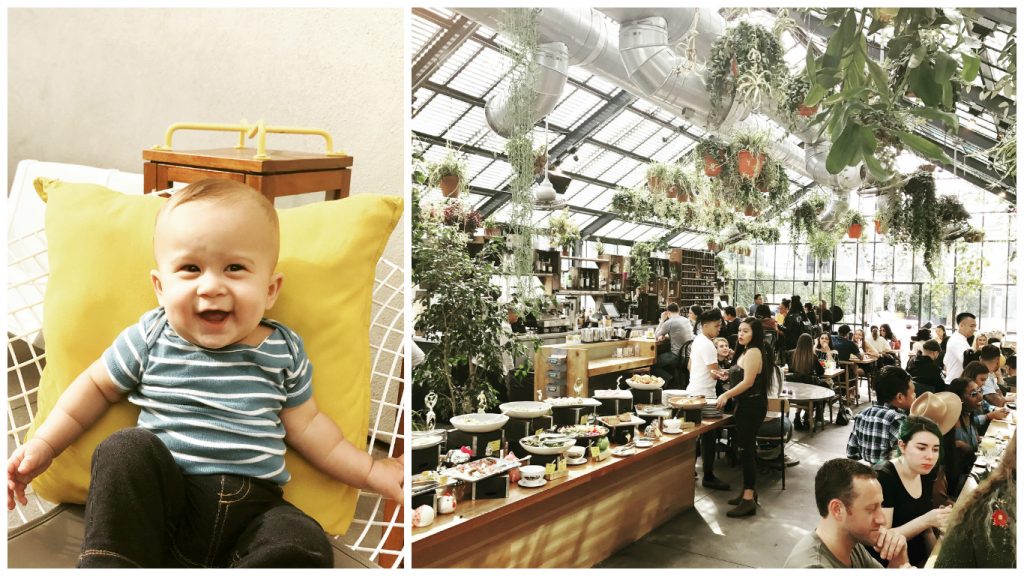 We ended our time in Koreatown with a stop at California Donuts. I have a major sweet tooth. Combine carbs with sugar and I’m in heaven. Due to the wide selection of doughnuts, we played it safe and basically bought one of everything. We were headed back to Carol’s brother’s for dinner and decided that we would win over the family with a box of fresh doughnuts.

The doughnuts were so fresh and practically melted in our mouth. I sprung for the samoa doughnut (because Girl Scout cookies) and Chris had a good old fashioned bacon maple donut. Temptation got the best of us in the car and we ended up splitting a fruity pebbles doughnut as well. It’s probably been twenty years since I’ve had fruity pebbles and truth be told, I could probably go another twenty without it. The doughnut beneath was incredible though.

Our time in L.A. was too short but we were happy for the 40 hours of sun, great friends, and good food. We’ve only been to L.A. twice and this was our longest trip. Who knows? Next time we might stay for longer than 48 hours. We’ll see.

What do we need to see on our next trip to Los Angeles? Let us know in the comment section below!

3 thoughts on “A weekend trip to L.A. with baby”