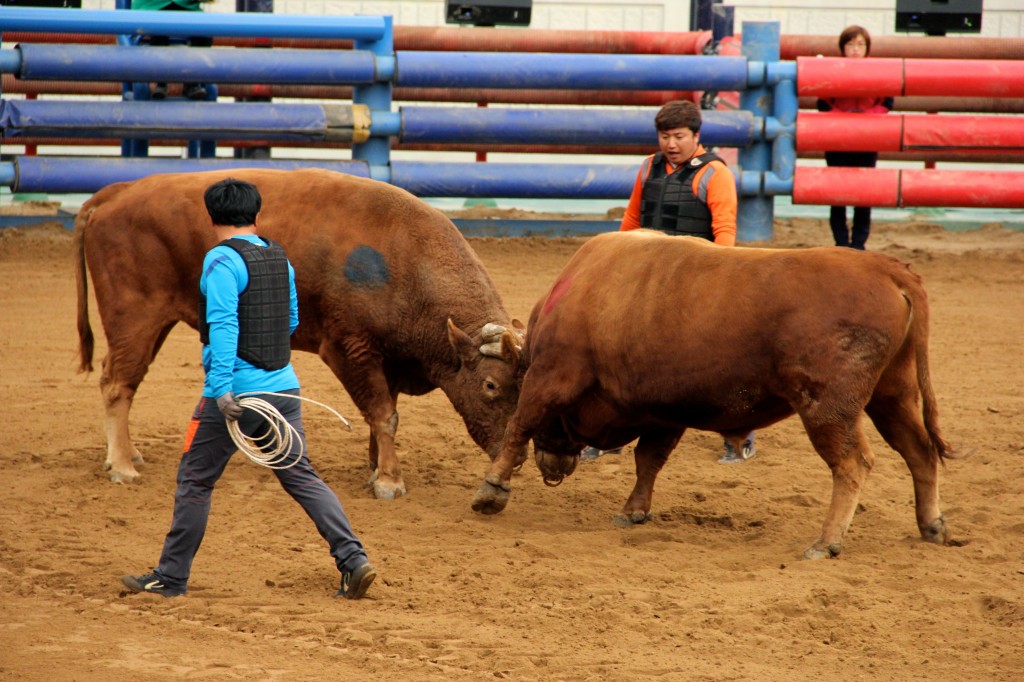 South Korea has a tradition of bullfights that is as long and time honored as the ones in Spain. With one very large difference, no one dies. A Korean bullfight features two bulls, released into a ring, that push against one another until one decides to run away. All the while their trainer is shouting encouragement to them over their shoulder. If any of you are old Pokemon fans it’s kind of the same thing.

While it’s uncertain how the tradition began, it can be speculated that Korean farmers saw their bulls fighting in a field over a thousand years ago and thought, “Hey, we could bet on this.” From then bullfights were immensely popular in small towns across the peninsula. At some point the sport lost some of its tremendous popularity. Not because of moral or ethical complications but because as Korea began to industrialize people had less livestock. No bull. The bulls on the other hand continued to enjoy their time honored tradition of head butting one another into submission to impress the local heifers.

In the last decade, the small town of Cheongdo (청도) looked around and realized that they were ankle deep in two great Korean resources, persimmons and bulls. As a part of the preservation of Korea’s cultural treasures (a movement that sought to bring attention to Korean culture and historical area after the Japanese wiped most of that out in WWII) the town of Cheongdo built a 10,000 person occupancy stadium explicitly for the purpose of bullfights.

A bull is often the prized possession of a Korean farmer. This was true in the past because a bull could create more cows (brown chicken, brown cow) but also because the were the workhorse (so to speak) of the Korean farm. Today they are still highly sought after and are bred in much the same way as race horses are in the US. A Korean farmer can trace the lineage of his bull back hundreds of years. Most trainers also take great pride in the care their bulls receive. Most feed the animals a diet of persimmon and grain for a month up to a fight. A few of the more traditional farmers even give the bulls some shots of soju (a sweet potato and rice liquor that tastes like vodka and is endemic to Korea) to get them in prime condition. It’s isn’t just bragging rights and breeding deeds that make the bulls so valuable today either. A winning bull can take home some hefty cash prizes every year.

The fights themselves last anywhere from 30 sec to an hour, depending on the bulls. A fight begins when the bulls lock horns and ends when one of them turns away and runs. Any of the four judges that circle the ring can call a tie if both bulls refuse to yield. Some bulls have an electric connection. The moment they catch sight of one anthoer they begin to bellow from across the ring as they are led inside. It feels like a shock wave when they connect and the dirt starts to fly up around their hooves. It seems like it would be the last place you’d want to be, but the bulls trainer (wearing the team colors of either red or blue) stands right next to his bull shouting encouragement and cheerleading them on.

One of the most exciting parts of the bullfight for the average Korean is the betting. As it was in the olden days it still is today. You can place bets anywhere from ￦1000 to ￦100,000 (roughly $1 to $100) on either red or blue. If you really want to make money you can also bet on a tie. It almost never happens but when it does you make a lot. The amount of money you win in a fight is dependent on the bulls percentage. Similar to horse races. You’re given a stat sheet when you first walk in that lets you know a particular bull’s wins, loses, and weight. If a bull has a 90% win ratio you won’t make a lot (if anything) when he wins. If however you bet on the underdog your potential for financial reward goes way up. For the most part though the betting is a casual affair and people really just show up to see the fights.

The bulls that fight in the arena live long, happy lives. Unlike their Spanish counterparts, the Korean bulls are never eaten. They continue to fight once a year until they get too old and then they are retired to the fields to spend the rest of their twilight years eating persimmons and grass.

We walked away from the Cheongdo bullfighting festival with a new appreciation for both Korea and for this new type of rodeo. Growing up on a ranch in Eastern Washington I’d had the chance to see bulls fight before but I never thought that there would be a place where you could actually bet on it. If you’re interested in the Cheongdo Bullfighting Festival you can find more information HERE. It runs for about a month every fall. 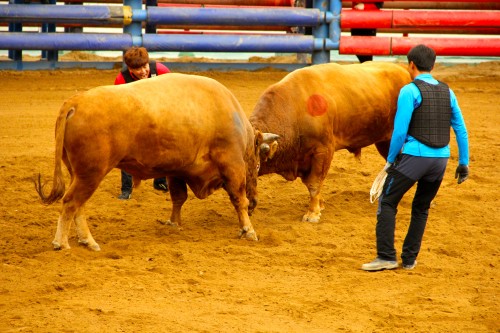 What about you? Would you go to a Korean bullfight?