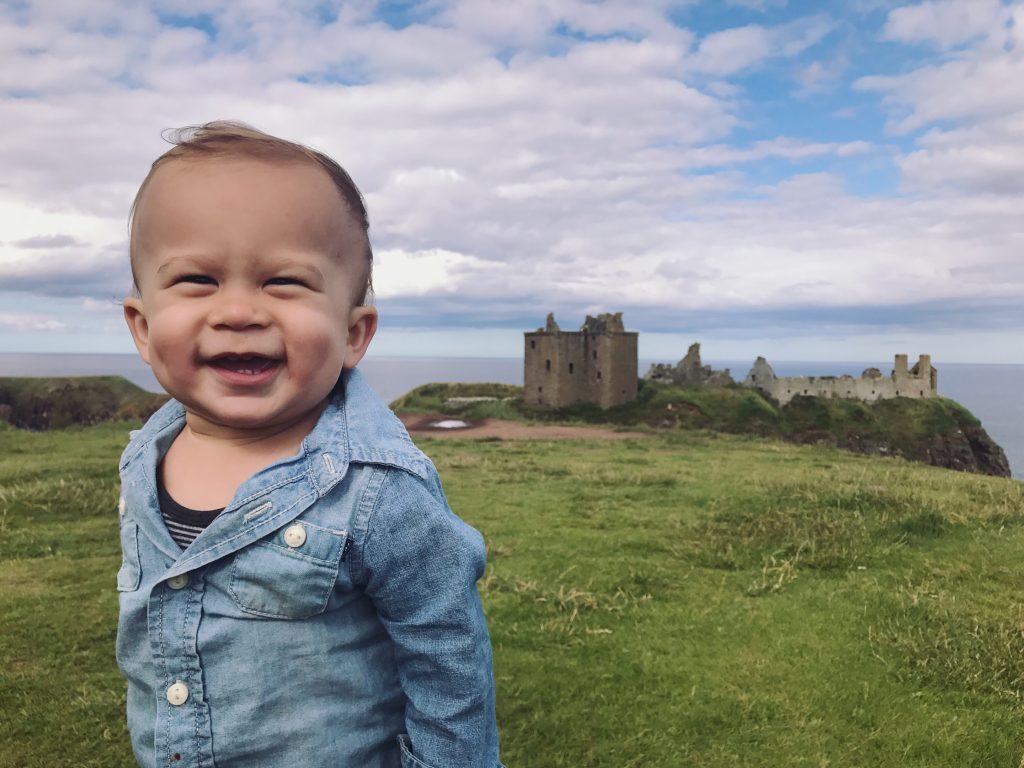 If we’re going to be friends, there’s one thing you should know: If you invite us to travel with you, you better mean it. There’s a strong chance that we’ll accept your invitation and then there’s no turning back.

Our friends Jackie and Paul had to learn that the hard way when they invited us to crash their Scotland honeymoon. It started as a joke while playing nerdy board games one night. “You guys should come with us. It would be awesome. Our condo even has two bedrooms.” And while it might have seemed like an off handed invite to them, I was definitely looking up airfare later that night. What started innocently enough soon turned into an all-out honeymoon crash. With the blessings from the newlyweds, we (Holden too!) planned on meeting them a week after they landed in Scotland. 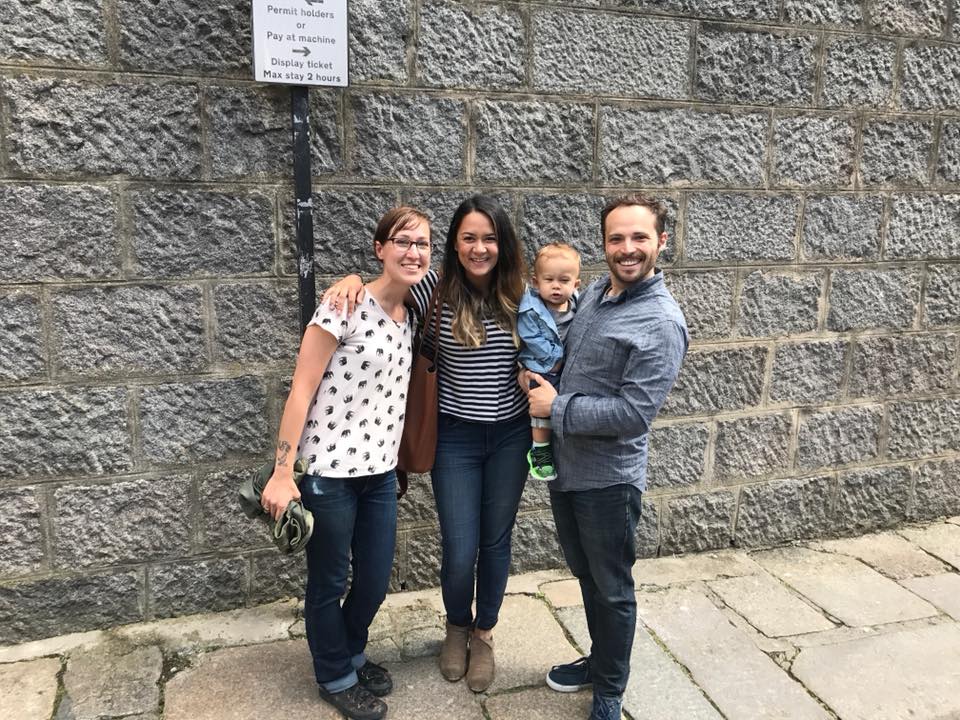 None of us had been to Scotland before and we were thrilled at the opportunity to explore together. Chris and I booked our airfare using miles (thank you, Alaska Air!) and flew from Seattle to New York (where we stayed with Holden’s godparents for a night) and onward to Aberdeen, Scotland.

Chris, Holden, and I had one night in Aberdeen before we were to meet up with Jackie and Paul. We arrived in the morning and it was our goal to stay awake as long as possible so that we’d adjust to the time change. That’s easier said than done when you have a one year old. Luckily, Holden was a champ and slept better than he had in months.

Heads up: Scotland is pretty expensive in the summer and it can be hard to find affordable accommodation. We ended up booking our night at Mercure Aberdeen Caledonian Hotel and LOVED it. It was in an amazing location, had beautiful light-filled rooms, and only set us back about $60USD a night. This isn’t by any means sponsored. We just really enjoyed this hotel.

I really wish we had spent more time in Aberdeen. I enjoyed the laid back vibe of the city. There was festive bunting strung over high street and everyone seemed so friendly- especially towards Holden. Chris and I agreed to have a traditional Scottish dinner for our first meal in the country but we were so famished that we ended up ducking into the first place that looked decent. It turned out to be a vegetarian restaurant (Foodstory Cafe, for you veggies out there) but the atmosphere was inviting and the food smelled incredible. I had the vegan chili while Chris devoured the vegan taco bowl. We left feeling both incredibly satisfied and full.

We strolled around the town until we couldn’t fight the fatigue any longer. I’m pretty sure the three of us fell into bed around 5PM (so much for staying up) but thankfully everyone slept in until around 7 the next morning.

After rendezvousing with the newlyweds the following day, we piled into our rental car (well, rental SUV) and headed straight to our first sightseeing destination. Dunnottar Castle looks like it came straight out of a fairy tale. Attacked by the Vikings, taken capture by William Wallace, visited by Mary Queen of Scots, and eventually saved from ruin, the castle’s colorful history is one for the books. The castle grounds are perched upon sweeping Scottish cliffs and appears as if it rose from the surrounding waves.

Castle tickets will set you back £7/ adult and £3/ child although family passes (admission for two children and two adults) are only £17. Guests are allowed to roam for as long as they want until closing.

After climbing the stairs to the castle entrance (and be warned, there are a lot of stairs), we paid our admission and began exploring the grounds. I particularly enjoyed the “free range” experience. Unlike most historical sites, we were able to wander at will. Holden particularly enjoyed running around on the grass and exploring the various rooms and tunnels. It would honestly be an incredible place to hold our next archery tournament. Who’s down for our first international tournament?

While we could have stayed at Dunnottar all day, our grumbling tummies has us yearning for lunch. The next time we visit, we’ll definitely pack a lunch so that we can take in as much of the castle as possible.

While Chris and I were teaching in South Korea, we had the pleasure of making friends with a feisty red-head named Claire who hailed from Scotland. Her go-to noraebang (karaoke) song was “The Bonnie Banks o’ Loch Lomond.” Or maybe it wasn’t. It might have been the copious amounts of soju, but we’d find often find ourselves in an inebriated stupor sining (or butchering) the song at the top of our lungs. If one actually listens to the lyrics, they’ll learn it’s actually a somber and heartbreaking tune, but to us, it will always be associated with Scottish Claire. So when we learned that the condo, Macdonald Forest Hills Hotel and Spa, is near Loch Lomond, we knew it was going to be awesome. 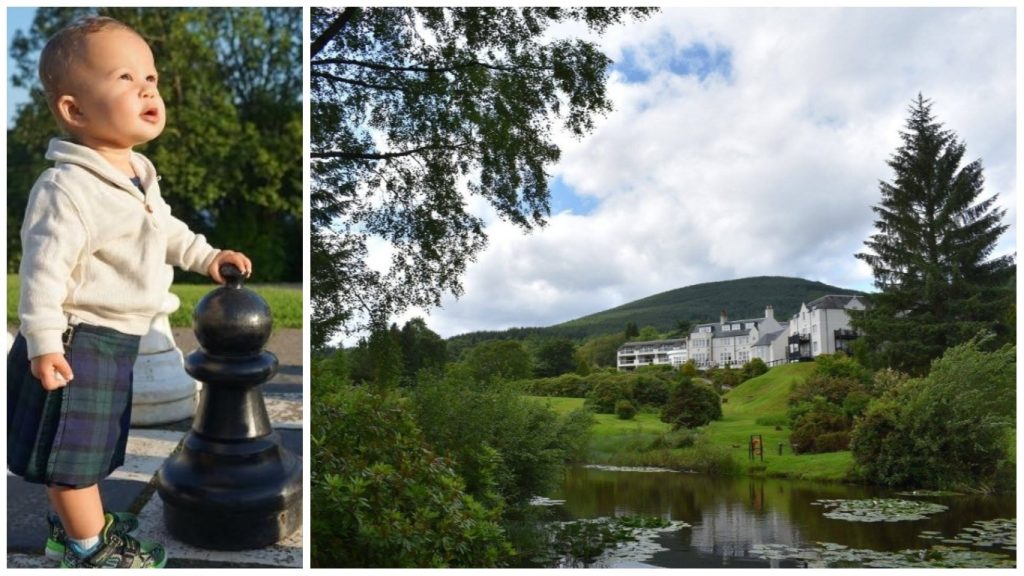 The two-bedroom timeshare that Jackie and Paul had for their honeymoon turned out to be a one-bedroom suite. Chris, Holden and I ended up claiming the fold-out couch in the living room so that the newlyweds could have their own little love nest. It ended up working out perfectly since Holden is an early riser. We would get up and start breakfast without disturbing the lovebirds.

Located in the Trossachs, the property itself was gorgeous. Though we were only a short drive from the town of Aberfoyle, we felt truly secluded from the outside world. On the mornings that we weren’t out exploring, we’d walk a kilometer alongside Lake Ard to a tiny breakfast haunt (I can’t remember the name of the place to save my life) for some freshly baked goods and posh porridge. We’d also spend lazy afternoons challenging each other on the giant chessboard. Holden particularly enjoyed frolicking around in his ridiculously adorable kilt. 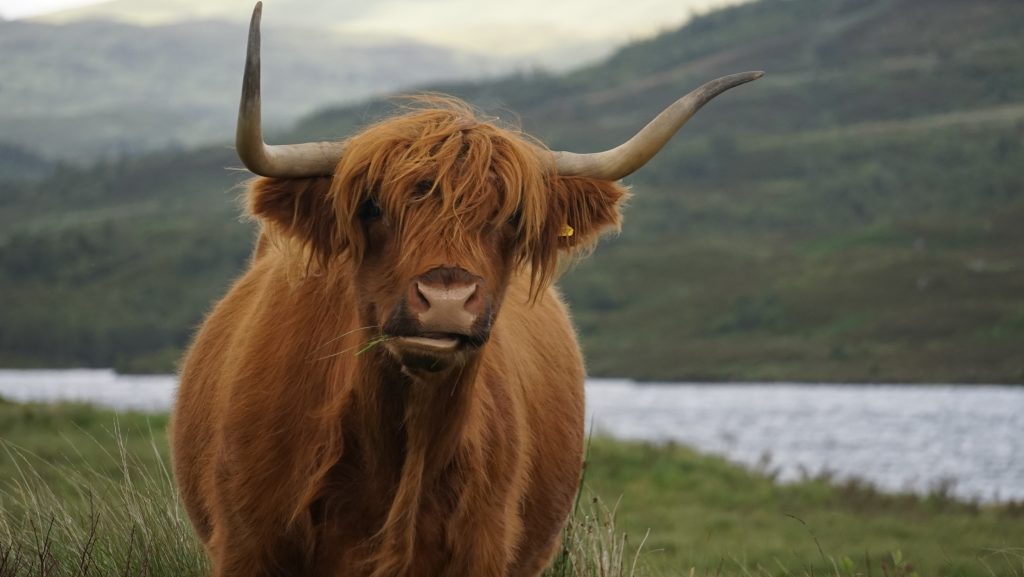 We also had the privilege of meeting up with two of our good friends who we met in while living in South Korea. Corey and Paul currently live in Liverpool and made the journey to spend a few days with us in Scotland. One of the days we were together, all seven of us piled into our cars and made way for Loch Lomond. 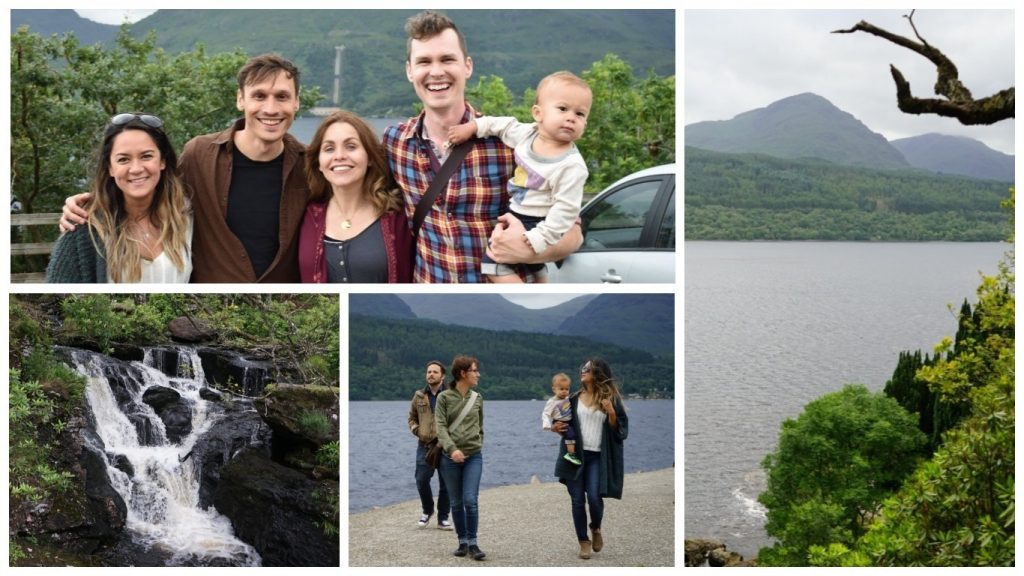 The drive up to Loch Lomond was breathtaking. We stopped along the way to take photos of the scenery and the most adorable shaggy Highland cows. Loch Lomond itself was just as beautiful as we imagined it to be. We even stumbled upon a few waterfalls that made the perfect backdrop for family photos.

In typical Scottish fashion, the weather was overcast and chilly but if it had been a nicer day, I’m sure we would have spent it actually on the lake itself. If we visit Scotland again, we’re hoping to stay at one of the many hotels on the lake.

Due to the location of our condo being an hour drive to both Glasgow and Edinburgh, we had the opportunity to visit both cities twice. Honestly, I found Edinburgh to be the most charming of the two but we ended up spending more time exploring Glasgow. 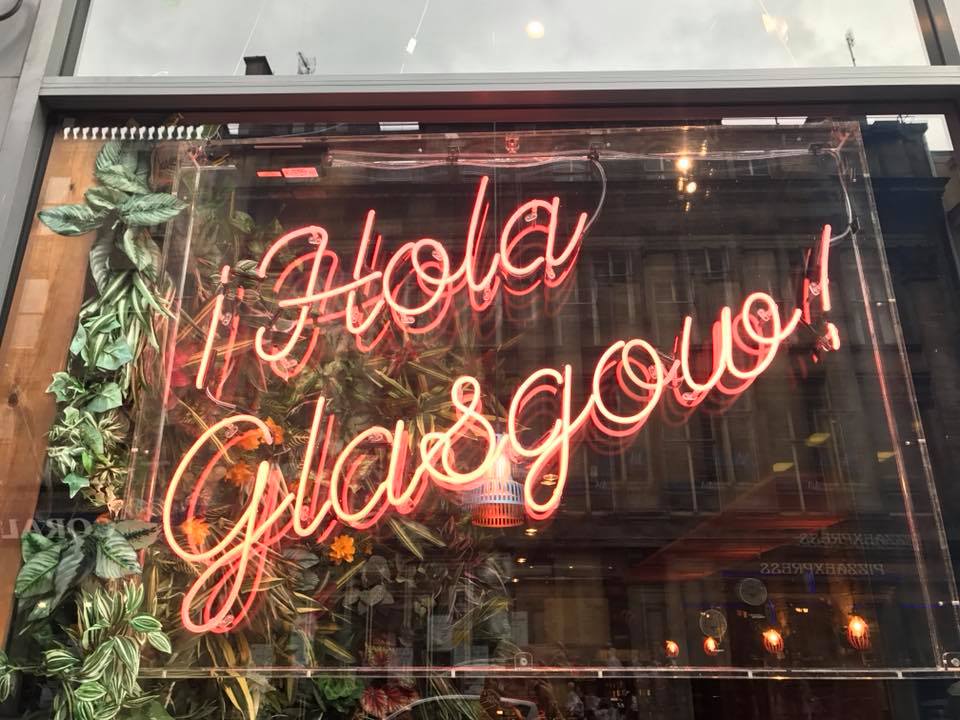 Truth be told, we had more time to spend in Glasgow and thus, were able to see much more. Most of our time was spent on foot, getting lost as we searched for food. Isn’t that how we spend most of our trips? 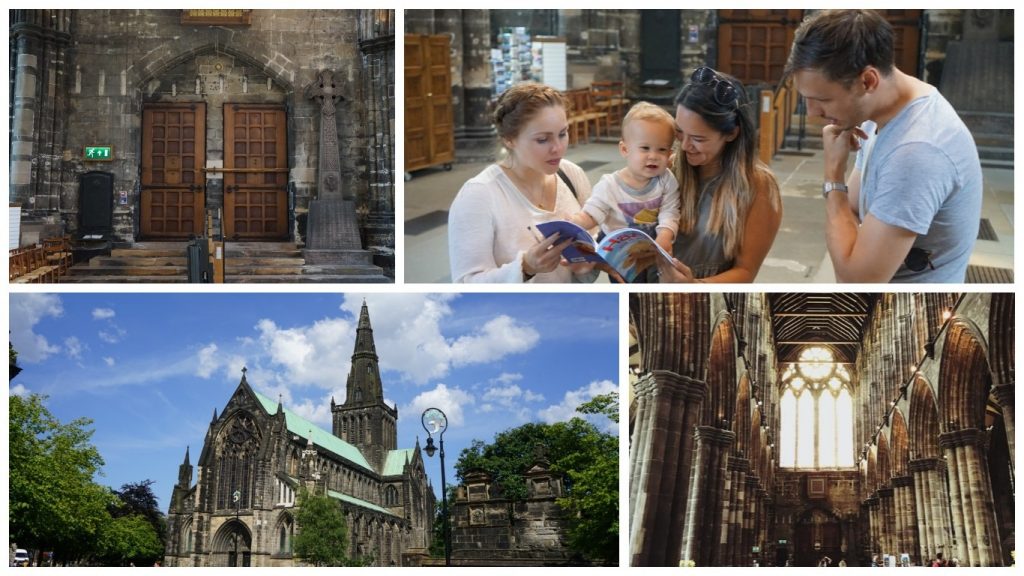 Without a map or a plan, we wandered the streets, ducking into various shops until we stumbled upon the Glasgow Cathedral. Built in 1136, we were immediately entranced by the stunning gothic architecture and how the cathedral seemed to loom over the city. The cathedral was destroyed by a fire in the 12th century but was soon rebuilt with towers and updates evolving throughout the years. Walking around the interior of the cathedral, you’ll see the striking nave, ornate organ, the stunning Millennium stained glass window, and the tomb of Saint Mungo, an apostle of the Scottish Kingdom of Strathclyde and founder and patron saint of the city of Glasgow.

With all of our exploring, we worked up quite the appetite. Two of our favorite meals in Glasgow came from The Smokin’ Fox (6-8 Waterloo Street) and The Admiral Bar (72A Waterloo Street). The former, a sexy restaurant with a cocktail menu to match the swanky decor. And the latter, a laid back pub with an assortment of mac and cheese dishes. You really can’t go wrong with either. 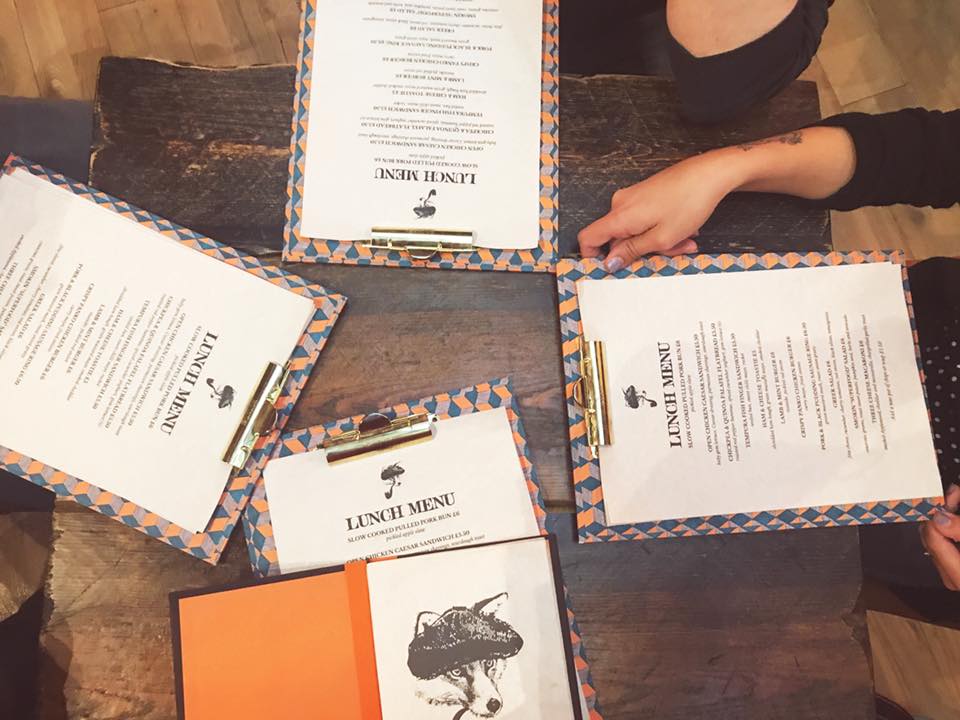 We have so much more of our trip to share with you. In particular, our day trip though the Highlands, flying falcons, and our ambitious (and successful) hunt for Chris’ families’ ancestral home. Stay tuned as we roll out more from our trip to Scotland. 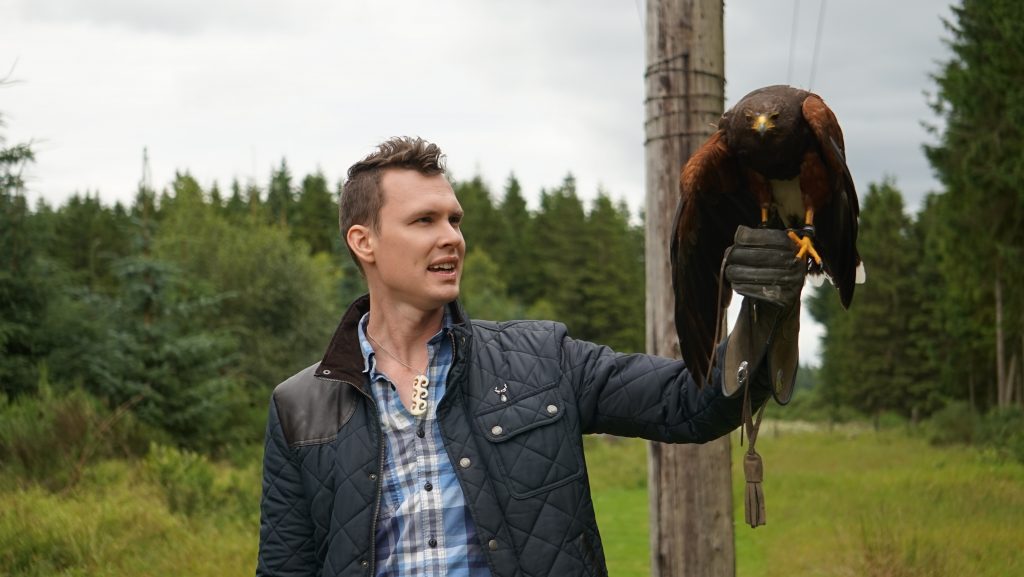