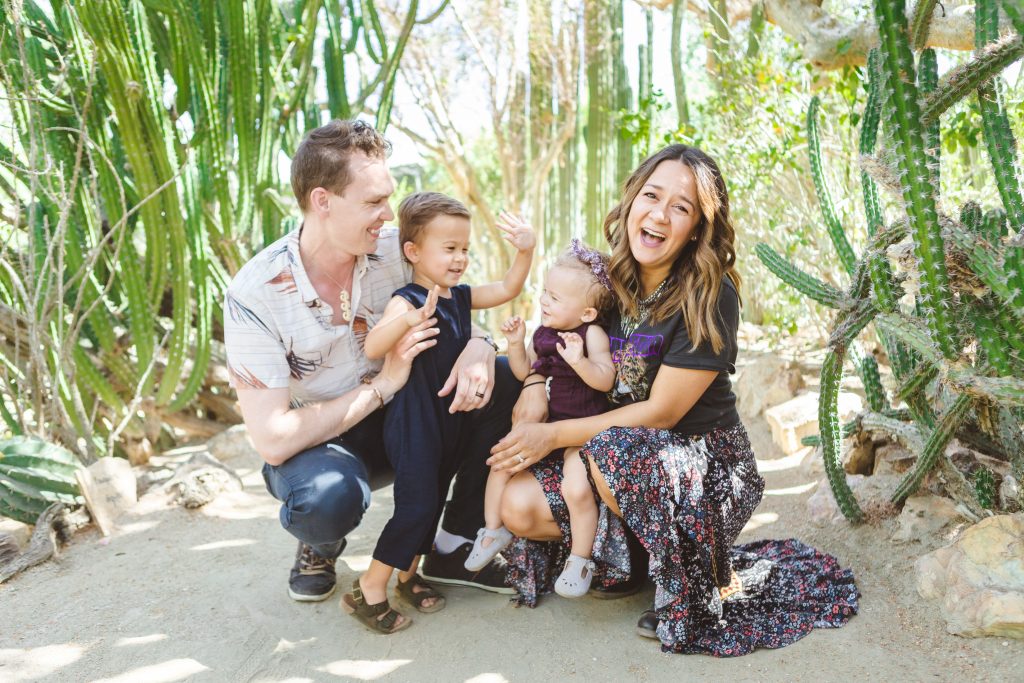 I was getting itchy feet. It had been exactly two weeks since our last trip (a brief visit to Tennessee for a friend’s wedding) and I was ready to hit the road.

I knew that I wanted our next trip to be somewhere warm (but not nearly as humid as Tennessee was) and that the kiddos would be accompanying us. It also had to be budget friendly since we literally just returned from a trip. After a little research and playing around with different flights, we decided to book airfare from Seattle to Las Vegas. But we weren’t stopping there. From Las Vegas, we’d drive to a place that I’ve wanted to explore for a while: Palm Springs.

To be fair, Chris and I have been to Palm Springs before. It was seven years ago. We decided to road trip from Washington, down to Vegas for an event, then over to California and back home via highway 1. While it was fun to be young and spontaneous, we didn’t realize just how expensive our little endeavor would be. And when we finally reached Palm Springs, we were so broke that we couldn’t afford to stay in town. We had to settle for a meal of crappy Thai food before moving along.

Ever since that trip I’ve wanted a redo. I never would have thought it would be seven years and two kids later but it was totally worth the wait. 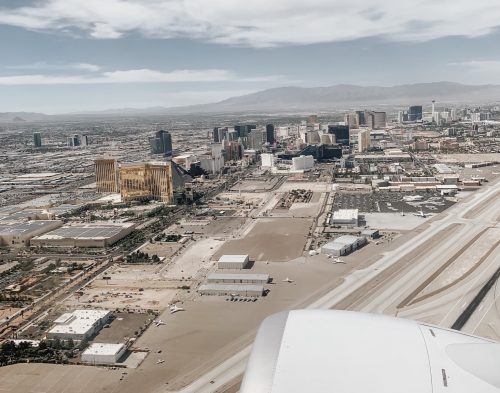 Flights from Seattle to Las Vegas were nearly $200 cheaper than flying directly into Palm Springs. We factored in renting a car and buying gas for the 4-hour (one way) drive and it was still worth it to fly into Vegas. We also scored BIG TIME when our first flight was delayed and we were offered $500 flight vouchers PER PERSON to switch to a later flight. Done deal. We ended up making money after all was said and done.

If you’re game, I’d recommend playing around with flights to see what will save you the most money. We could have also tried flying into LAX (with a shorter drive time) but ultimately found the best deal to Vegas.

There are two hotels that I’ve always wanted to stay at when visiting Palm Springs. Those two are The Saguero and The Ace Hotel & Swim Club. I was drawn to the brightly colored picturesque exterior of The Saguero. It looked lively and fun. So when I stumbled upon ridiculously affordable (non-refundable) rates for the The Saguero, I booked in a heartbeat. 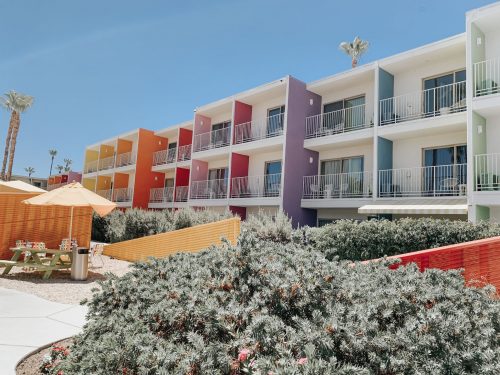 I got one thing right: The Saguero is both bright and lively. In fact, there was a little too much of the latter. Young, twenty-something year old me would have loved this place. There were live DJs and all-day pool parties. The hallways were flocked with scantily clad youth talking about a variety of subjects not quite suitable for our small children.

There were a few pros to our stay at The Saguero. One: Holden’s obnoxiously loud train sounds were masked by the thumping beats from the DJ booth. Two: The large rooms allowed our children to run off any excess energy before bed time. Other than that, we realized that in our short stay, we had outgrown the hotel. 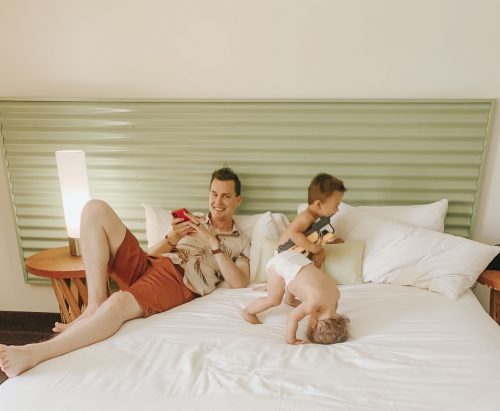 The final straw was when we returned from a day of exploration. We were hot, hungry, and tired. Chris was weaving our double stroller through the throngs of intoxicated party goers in the lobby when one very inebriated man pointed at our little family and loudly slurred, “I nevvvver want that liiiife.” Chris and I both rolled our eyes and made our way to our room. Within two minuted of being there, Chris was fiddling on his phone. And shortly after, he exclaimed, “I’ve got us a new hotel. We check in tomorrow.” And thus ended our time at The Saguero. 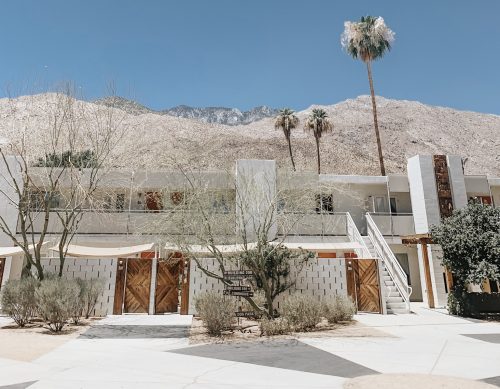 An oasis. That’s what The Ace Hotel & Swim Club was to us after our brief stay at The Saguero. It was clean. It was trendy. It was quiet. And it felt more, shall we say, “grown up.”

Our room was incredible. It had a large bed, two comfortable lounges that turned into twin beds at night, and the added bonus of a private, enclosed deck. When we weren’t at the pool, we were giving our kiddos their first taste of popsicles. It was incredibly messy but totally fine since we just rinsed down the space when they were done. 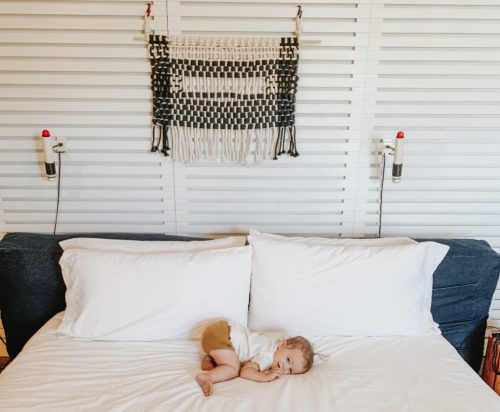 While we only had two nights at The Ace, we made the most of our stay by enjoying the awesome guest amenities– whether it was posting up by one of the nightly fire pits or enjoying a breakfast at The King’s Highway diner. And when it wasn’t a million degrees outside, we’d take the tots on a walks of the premises, collecting decor ideas for our future abode.

All in all, I’d highly recommend anyone book a stay at The Ace Hotel & Swim Club. Check their website before booking through a third party site as they often run promotions that will save you a little extra money. 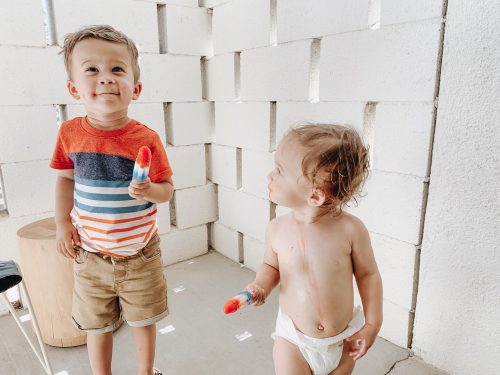 It wasn’t all pool parties and popsicles. Even though temperatures were reaching the 100s, we decided to take in as much of the area as we could. In the end, I think we found a little something for everyone.

Holden’s recent obsessions include trains and dinosaurs. Thankfully, we were treated to both at the Cabazon Dinosaur Park. When we pulled up, our grumpy toddler immediately perked up when he noticed a freight train passing by. Little did he know, his mind was about to be blown with giant dinosaur models.

Admission is $13/adult (ages 13-54) and $11/children (ages 2-12). Children two and under are free. If you think your child will be happy with simply seeing the giant T-Rex outside the gate, save yourself the money. But if you have children that are even remotely interested in dinosaurs, digging for fossils, or panning in a cool stream, go ahead and fork over the cash. While Holden breezed through the winding path, barely stopping to take in any of the dinosaur models that greeted him, he LOVED “panning” for dinosaur bones in the little stream at the start of the park. I’m pretty sure he could have stayed there for hours but both Henley and I were over the heat.

Once we finished our dinosaur adventure inside, we stepped out to take photos of the iconic T-Rex and grab a bowl of Sweetosaur ice cream. That might have been my favorite part.

Okay, so the kids might have slept through our entire trip through Joshua Tree but I have full confidence that if they were awake, they would have loved. it. To be fair, we had poorly planned our excursion after a day of exploring (and dinosaurs!) and the kids were exhausted. They fell asleep before we even arrived and stayed that way until it was dinner time. 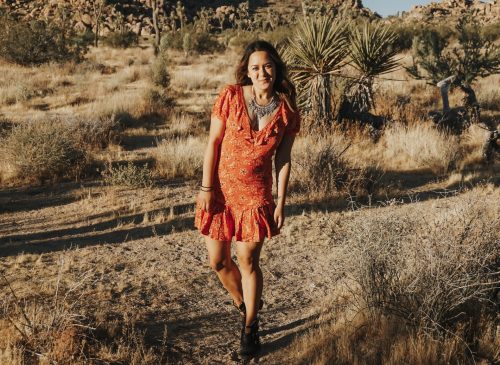 Chris and I, on the other hand, loved our evening drive through Joshua Tree. We stopped for some photos, watched a few tourists attempt to climb a few rocks, saw ALL the Joshua Trees, and then left. If the kids had been awake, I would have loved to stop and do a mini hike on one of the paths. Next time! 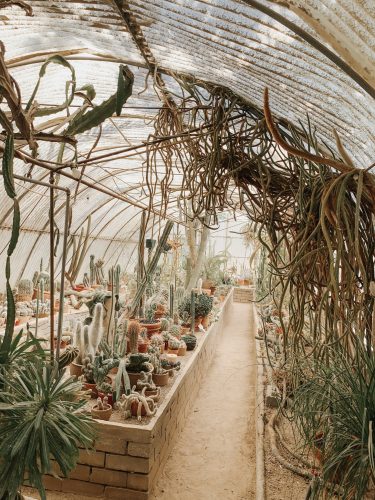 I’ve seen photos from Moorten Botanical Garden’s beautiful cactarium grace my social media feeds for years. It’s what the kids these days are calling “insta worthy,” The cactus nursery, as I’ll call it, was both the stuff of dreams and nightmares. The latter because sharp objects and inquisitive toddlers don’t really mix.

Nevertheless, we enjoyed walking through the garden and taking in the various local flora that is foreign to us in the Pacific Northwest.  We visited early in the morning so that we could beat the heat of the day. Although we still ended up melting, Holden enjoyed scouring the gardens for dinosaurs (there were a few) while Henley was fond of giving me a heart attack every time she reached for a dagger sharp cactus. There were also a few tortoises and birds on the premises that both the kiddos loved.

All told, we spent about an hour exploring the gardens. We probably would have left a little earlier but I had a very special surprise planned for the family. Take a peek below. 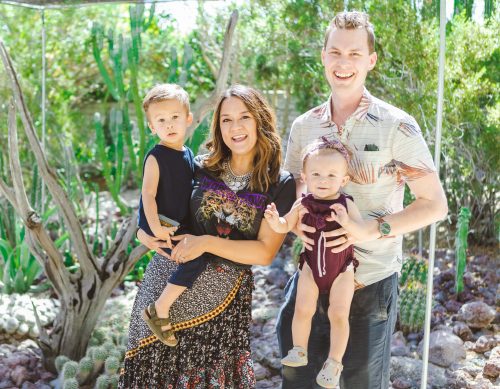 One thing that I’ve been more conscious of since having kids, is taking photos for our children to be able to look back on. And while we take a ton of photos while traveling, we rarely get any with all of us in it. Enter Flytographer. This service offers you a personal photographer who meets up with you in a location of your choosing and delivers professionally edited photos in a fast turnaround.

While it’s easy to ask a stranger to take your family photo in front of the Eiffel Tower, you might end up with a shot where your heads are cut off or only half of you are looking at the camera. Flytographer takes out all the guess work and you’re left with frame-worthy photos to last a lifetime. 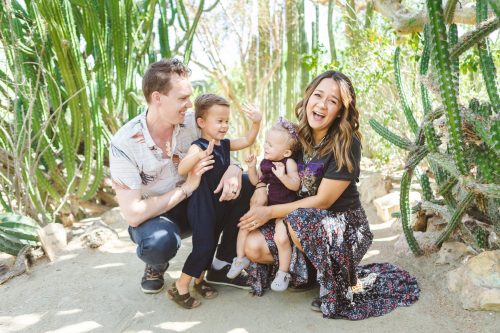 Chris and I have had a Flytographer shoot in Slovenia and one on Maui (for our babymoon) so I was extra excited to finally use them for our family photos. We met our Flytographer, Melissa, at Moorten Gardens early in the morning (in order to beat the heat) and she followed us around snapping photos as the little ones explored. 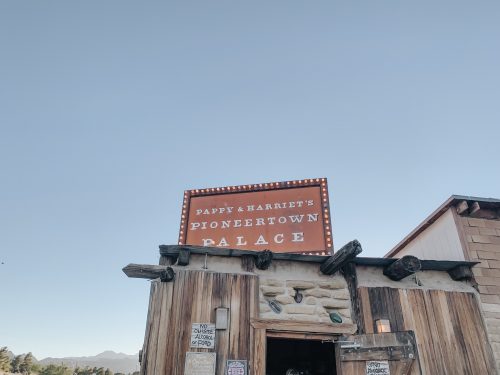 Pappy & Harriet’s: A Perfectly Pretty and Gritty Place to Eat

There’s no shortage of restaurants in Palm Springs but if you want to get down and dirty at a cool local haunt, you have to visit Pappy & Harriet’s Pioneertown Palace. This legendary watering hole is known for its hearty food, live music, and generous pours.

Pappy & Harriet’s felt like a gritty dive bar but was also a comfortable place that welcomes families. We were seated right behind the sound booth and Holden enjoyed looking at all the buttons and lights. It only got better once crooner Brian Whelan took the stage and wowed the crowd for a few sets.

Our dinner was delicious (steak for Chris and I bison burger for myself) and even though it was past their bed times, the kids seemed to have a blast. 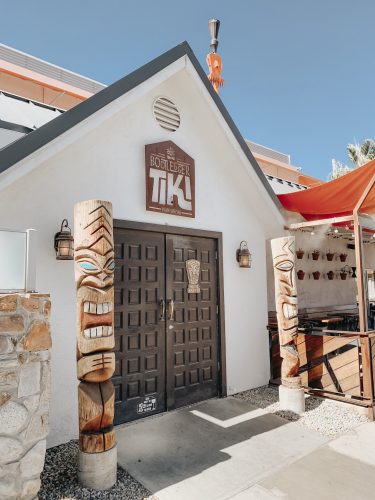 A Tiki Treat for Adults Only

As parents to two small children, I think it’s very important to take a little time for yourself. For me, that involved taking a shopping trip downtown Palm Springs. And for Chris, it was visiting a local tiki bar.

Bootlegger Tiki sits where the original Don the Beachcomber Tiki Restaurant once stood. Now a craft cocktail bar, it serves us some of the most delicious (and creative) libations in town. 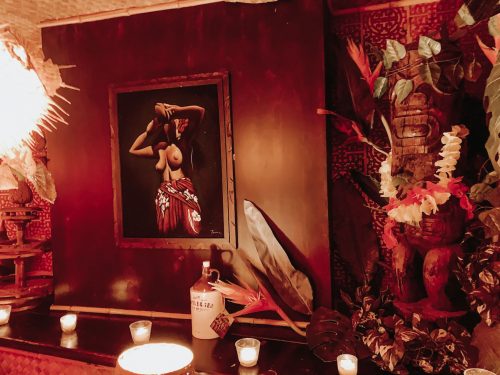 While not a place suitable for the kiddos, it’s the perfect oasis for a parents’ night out. Chris snacked on sriracha popcorn while throwing back a “Thar She Blows”– a medley of O.F.T.D., White Rum, Plantation Pineapple Rum, Génépy, Amaro, House Falernum, Aperol, Pineapple, Grapefruit, Lime, Cinnamon, Grapefruit Bitters, and Cucumber Bitt.

Will we return to Palm Springs?

Of course! All in all, our four short nights in Palm Springs were a blast. Our plan is to return to the desert during one of the cooler months so we can enjoy more of the outdoors (sans blistering heat). I’m also making it a goal to do an adults only vacay in the near future. I want some time with Chris at Bootlegger Tiki!

My advice for traveling to Palm Springs with small children is to take it slow. Plan for naps and breaks. Also be sure that you and the babies are staying hydrated. And unless your child enjoys boozy pool parties, maybe skip The Saguero.