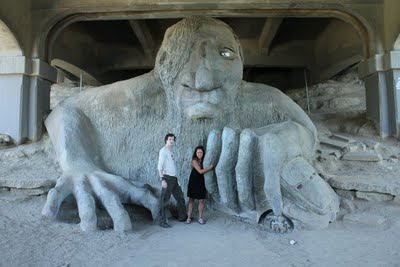 There’s nothing half so pleasant as coming home again.
-Margaret Elizabeth Sangster

This picture was taken last summer.   The boy and I had just returned home from 14 months in Korea.  We were given 5 weeks to immerse ourselves in everything American, and let me tell you- we did.  It’s ironic because it was one of the best vacations I have ever had and I spent it rediscovering my homeland.

This particular picture was taken on a day trip to Seattle.  Chris finally took me to see the Fremont Troll tucked away under its bridge.  It was the first and only time that I’ve seen it in person and we quickly snapped a picture before another bus of tourists arrived.  Sometimes it’s nice to play tourist in your hometown.

See you soon Seattle! A little over a month until I’m back in your overcast arms!