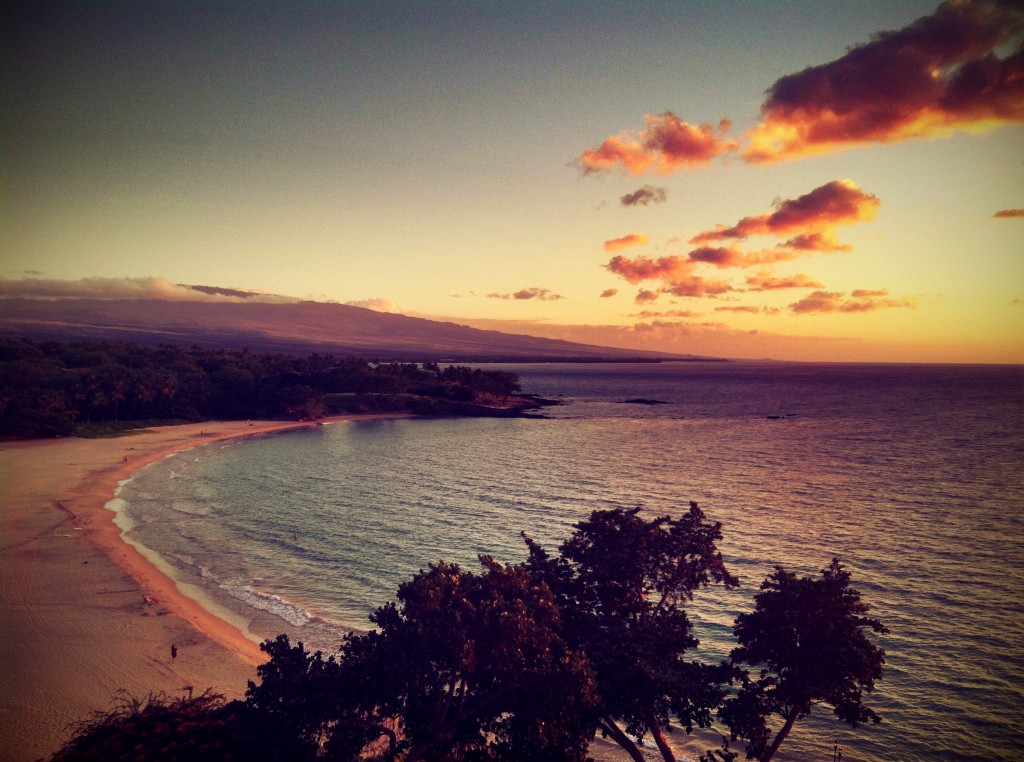 We stayed in some gorgeous places in Hawaii. As it was our honeymoon, we decided to go big with our choices. This was Tawny’s first time to the Big Island and my first time walking around. I’ve only ever been here as a refueling port while sailing or cruising. I’m sad it took this long. The wild and sweeping beauty of the place is jaw dropping. Not to mention, it is a fricking volcano. (It also has a snow-capped peak sitting at 13,803 ft {4,207 m.}) This trip I also learned that the big island was the home island of Kamehameha, the king who united the Hawaiian islands. It was also the island where Captain Cook died. Sooooooo much going on here. However, I digress. What we’re really talking about here is the honeymoon. The good stuff. Let’s start with our first night on the island when we stayed at the stunning Mauna Kea Beach Hotel.

I don’t even know where to start with this place. Looking out of the balcony at the beach is like feeding your brain guava chiffon cupcakes. The view is almost intoxicating.

One of the coolest parts was that one of my good friends from PLU grew up here. When she saw the picture of the Mauna Kea on Facebook she reached out to offer her congratulations. A few hours later this showed up in our room.

(Thanks Erin. We owe you one.) Family is definitely the theme of the Mauna Kea though. We ended up being friends with all the staff and having a blast just wandering the halls. It was impossible to find a bad view.

The hotel also has a cool open air design which made it feel like a royal court. Tawny and I dug it. The Mauna Kea surprised us by jumping a long list and making it to our top ten hotels in the world. Maybe even top five. Some combination of the friendliness of the staff, the incredible view, and the luxury of the rooms caught us off guard and won us over. Not to mention the beach.

This beach has some of the best snorkeling and swimming we found on the island.  We didn’t try any surfing here but it was a good spot for stand-up paddle-boarding. For me, the best part were the rays. The big island is famous for its local manta ray population and night dives with the rays. We didn’t get the opportunity to try that but I did spend a huge portion of my day swimming with my new buddy. The rays are really inquisitive and completely harmless. Unlike their smaller cousins, these rays have no sharp tail barbs.

It is a rare thing, but Tawny and I gave the Mauna Kea 9.5 stars out of 10. An unheard of score for Captain and Clark. The Pride of Baltimore II tall-ship only got 8 out of 10.

It’s no secret that we love vacation home rentals. In fact, they are our favorite form of accommodation when we travel. You want to talk about living like a local? Boom. Apartment and home rentals are the best way to do it. AirBnB is a nice way to kick it local style, but for the Big Island we also found this gem.

Puakea Ranch is an old plantation/ranch on the Big Island that has been converted into the sexiest and most charming vacation home rental we’ve been to since the Balch House. It had horses, hammocks, a pool, a full kitchen, a huge entertainment system, and a vintage swing and parasol. It was a gift from the heavens wrapped in perfection. This was our favorite spot to honeymoon. At night we’d get a nice breeze rolling through the window and the soft moo of a cow in the pasture over. Tawny and I agreed that this was the best spot to shed the stress of a wedding. 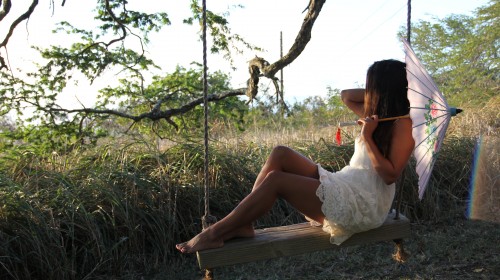 When you roll through the coded gate to the ranch, the horses come up to greet you.

The ranch has several houses available but we ended up with Miles Away. It had its own private pool and hammock. However, that wasn’t the best part. The house had a half bath just off the living room and a shed off the back porch. When we first threw down our bags Tawny and I went exploring to find every hidden corner of the house. What we didn’t see was a shower. We looked all through the house before we realized that it had to be in the shed. 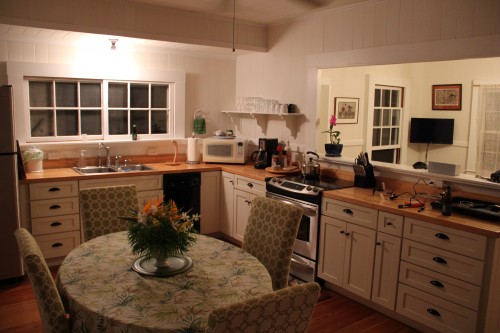 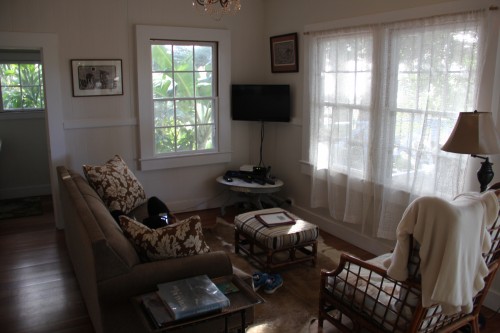 Tawny was nervous. She didn’t want to open some seedy door and find an out house full of geckos. What I mean to say is, she sent me. I think this is part of the “being married” thing. It’s now my duty to inspect dubious shacks and such and report my findings to her. I’m no stranger to outhouses, and I’ve used toilets in India, so I was prepared for whatever was in the outlying bath house. Or so I thought. When I opened the door though I about passed out.

Before me unfolded a magical kingdom of hand-carved Japanese woodwork and a rich scent of spices and plumeria. One of the single most beautiful bathrooms I’ve ever seen greeted me on the other side of the door. I didn’t even know what to go back and tell Tawny. So I took a bath, a shower, and went to find her to tell her it was ok. 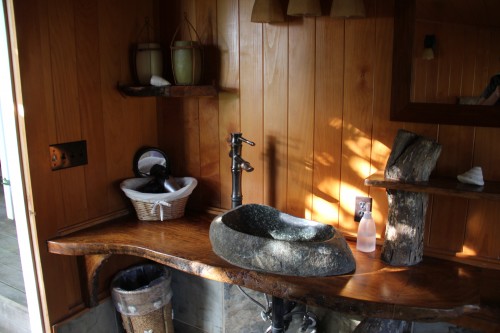 Hello honeymoon. Leaving the Puakea Ranch was like losing a friend.

We wanted to see a more central location on the Big Island. (Such as it is.) Our last stop for the honeymoon on this island was the Kona Beach Hotel on the water. This was a sweet spot because of where it was situated. While the other two places we stayed were all about the experience of staying in, this was a nice hotel for getting out.

Right in the heart of downtown Kona it gave us the chance to get out and see the Kona brewery. This was where we fell in love with Wailua ale. It’s a Kona brew made with Lilikoi (passionfruit.) For that alone we would have stayed downtown.

With all of these love nests it’s been hard to choose our favorite. All of them have been sweet spots to honeymoon. We’re interested in your opinion. Based on the pictures and your personal style, which place do you think you’d prefer?

5 thoughts on “The Big Island – Hawaii”